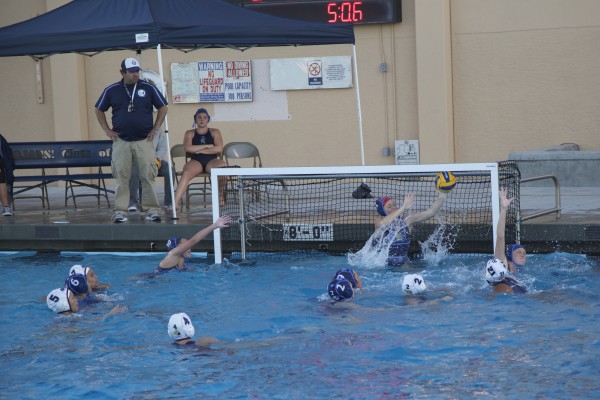 Goalie Molly Hudash (Sr.) reaches for one of her 12 saves against Northwood. (Alex Novakovic)

[For the full photo gallery, click here.]
By LEXI LIM
Staff Writer
UHS Girls Water Polo defeated Northwood High School (NHS) for its Game of the Week (GOW), but fell short against undefeated Corona del Mar (CDM).
Against Northwood, UHS scored consistently throughout the entire game to secure a 10-5 victory. Goalkeeper Molly Hudash (Sr.) had 12 saves for the game. She, along with the Trojan defense, held the Timberwolves scoreless in the first half. Shawna Kedzie (Sr.) scored half of the UHS goals in addition to two assists and three steals to spark the UHS offense.
Gauvri Nathwani (Jr.) said that during the GOW the team “pulled through, and it was amazing to play with the Trojan Army cheering and supporting our win.”
The next day, the Trojans struggled, falling to CDM by a score of 16-3. Kedzie was the only one that scored for UHS against the top team in Pacific Coast League (PCL). The Trojans were doomed by a slow start, falling behind 1-8 by the end of the first half.
Co-captain Sophia Bajak (Sr.) said, “We’ve done way better than we have in previous years, so I’m proud of our performance.”