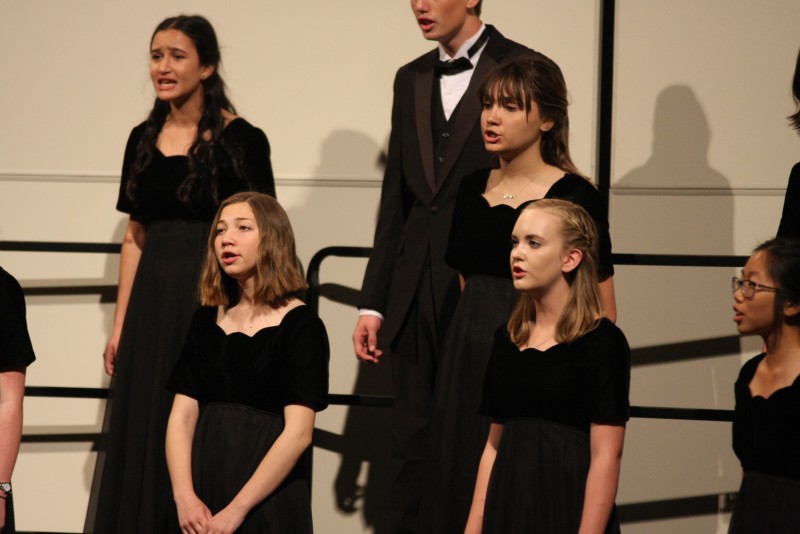 The Madrigals start off their performance with "Ain't Got Time to Die". (Danya Clein)

By CHRISTIAN ZARAGOZA
Staff Writer
Directed by choir teacher Mr. Justin Olvey (Visual and Performing Arts Dept.) and accompanied by Danica Silan (Sr.), UHS choirs (University Chorale, Concert Chorale and Madrigals), student-run a capella groups (Footnotes and Undertones) and a special guest, Rancho Middle School (RMS) Choir, showcased their talents together in the Spring Concert.
The theme of the concert’s music was spiritual and gospel. Pieces ranged from authentic old spirituals to more modern songs, some of which had a touch of musical theater.
“Bring Me Little Water, Silvy” was an a capella song performed early in the show by the University Chorale. The clapping and foot stomping throughout the song created a very unique rhythm. Sarika Mande (So.) started this beat followed by the singers next to her, until nine people were clapping and stomping. Shortly thereafter, Jasmine Hostetler (So.) performed “Summertime,” showcasing her vocals as a soloist.
Afterward, Footnotes, one of the two student-run a cappella groups, performed “Ain’t-a That Good News,” an upbeat, positive song that began with only the female members’ voices before transitioning to full-on harmonies from each member of the group.
Concert Chorale showcased its flexibility with tempos by performing “Didn’t My Lord Deliver Daniel,” a song that began slowly but gradually progressed to a quicker beat, mesmerizing the audience with interesting variations in rhythm.
To begin the second half of the show, a small group of only seven singers performed “All Good People,” which included foot stomps to complement its slow pace. One of the singers, Tyson Monroe (Sr.), incorporated his signature beat-boxing skills to accompany the a cappella song.
Then, the special guests of the show, the 7th- and 8th-grade members of RMS Choir, began their performance. They were dressed in all white, creating a striking juxtaposition with the all black that the other performers wore. They began with “Elijah Rock,” in which the boys and the girls took turns singing “Elijah,” which built up to a more upbeat, harmonious unison. The second song, “This Little Light of Mine,” brought a familiar tune to the stage, while their final song, “Joshua Fit the Battle of Jericho,” ended their performance on an upbeat note.
Next, the second student-run a cappella group, Undertones, began its performance with “Baba Yetu,” a piece led by Billy Huang (Sr.) and accompanied by Monroe’s beatboxing. Undertones’s second and final song, “Bottom of the River,” also incorporated the stomping of their feet. Ryan Do (Sr.) said that the Undertones were “really fun to watch, especially because the first song [the Undertones] sang was in a foreign language.”
The final high school choir to perform was the Madrigals. The Madrigals began with the upbeat “Ain’t Got Time to Die,” with soloists Corinne Alsop (Jr.), Billy Huang (Sr.) and Ana Fujimoto (Jr.). They ended with “Walkin’ Down that Glory Road,” which was an especially noteworthy song for Olvey because it was the “first song [he] had ever sang in choir.”
The final song of the night was “Amazing Grace,” which captivated the audience. It began with Shaden Ahadi (So.) singing solo, a role for which every member of each high school choir auditioned, and then only the Madrigals and RMS Choir singing together. Midway through the song, however, the audience was pleasantly surprised as every other choir entered the auditorium and joined in while standing in the aisles. Anne Jang (Sr.) said, “Amazing Grace really made a lasting final impression on me. It was a really good way to end the show, and I can honestly say that this was one of the best choir concerts I’ve attended [at UHS].”
The next performances by the UHS Choir Program are Cabaret Night, from May 18th to May 20th, and the final concert, the Pops Concert, on May 31st.