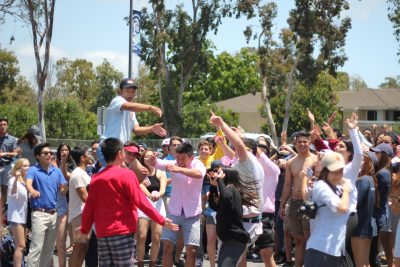 BY MATTHEW CHONG
Staff Writer
During lunch last Monday, the UHS senior parking lot was abuzz with activity. Members of the graduating class stood in the warm summer heat, enjoying a respite from another mundane day at school. Soon, the crowd grew ecstatic, laughing and dancing with their friends as “DJ Gabe” Kurtz (Sr.) played an irresistible beat. As the music blared on, the camaraderie amongst the seniors was palpable, almost infectious. Thus began Crazy Week 2016.
“The purpose of Crazy Week was for all the seniors to come together one last time, bond, and just have a lot of fun,” co-organizer Tal Harris (Sr.) said. Throughout the week, seniors participated in activities and wore clothing related to a certain theme, which changed daily.
The week began with a “Frat Out” theme on Monday, with seniors dressing in the style of fraternity or sorority members. During snack, students took part in pick-up volleyball matches on the grass near the senior lot, followed by a dance party at lunch.
The fun continued with Senior Activity Day, as the graduating class was treated to a day at Six Flags Magic Mountain. “Going to an amusement park is fun, especially when you go with people who’ve never been on  roller-coasters before,” Steven Jin (Sr.) said. “The looks on their faces are priceless.”
Wednesday saw many seniors sporting stuffed animals or freshman class shirts in honor of “Freshman/Baby Day.” In the morning, amusement abounded as Austin Barber (Sr.)  and Elias Tita (Sr.) read children’s books aloud to the senior class. “[Eli and I] had absolutely no idea what we were doing, but [our fellow seniors] supported us and we made a few people laugh,” Barber said. The day’s events came to an end with a walk to Albertson’s for lunch. “Walking off-campus brought back a lot of memories from freshman year,” Suniul Karim (Sr.) said. “But the most memorable part of the walk was when [the senior class] yelled at the freshmen as we passed them.”
For Thursday’s theme of “Halloween 2.0,” seniors were able to relive October 31st for a second time this school year. The senior lot was adorned with Halloween decor, and students dressed in costume, trick-or-treating at classrooms throughout the campus. Games and costume contests were held at lunch, followed by a “monster mash” dance party. In the evening, seniors brought in tents and sleeping bags in order to camp overnight at Mason Park and then make their way back to the UHS campus early in the morning at 6 a.m.
Crazy Week ended with Friday’s “Beach Day” theme, as the senior class dressed in their finest flip-flops, sandals, and other beach essentials.
Though five days may be a short period of time, lasting memories were undoubtedly made during this penultimate week of school. “Our class has been one of the most spirited in the past few years,” co-organizer Yamini Nambimadom (Sr.) said. “We’re all really close and I’ve noticed that our activities have really gotten everyone involved, not just various cliques or groups.”