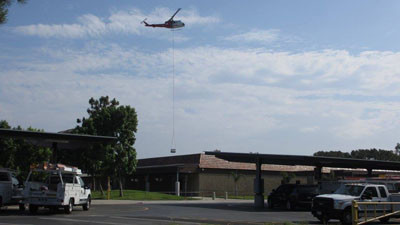 By SABRINA HUANG
Staff Writer
The majority of the school’s heating and cooling facilities were replaced over the summer after more than 20 years since they were last installed. In all, 95% of the school’s Heating Ventilation and Air Conditioning (HVAC) facilities were torn out as a result of the budget given to the school district by Prop 39.
The HVAC system was replaced in most buildings of the school due to their old age. The new installations happened while students were on summer break. In order to replace the system most efficiently, the school rented a helicopter to lift out the old facilities.
“The helicopter was the fastest and probably the safest way to actually remove and put on the new ones,” Mr. Raul Manriquez (Classified) said. “It was timelined–One day. If they would’ve used a crane, it would’ve taken weeks to actually do the job. So you know versus helicopter or crane, they decided [on the] helicopter.”
Once the old facilities were removed, a maintenance crew came in to piece the parts of the new units together. It took two to three weeks to start the piping, dampers and ductwork.
For the past few years, maintenance crews had to physically fix broken parts of the HVAC system that made classroom temperatures skyrocket and dip. The new HVAC units and advancement in technology has made the repairing process more efficient.
“Everything is computer-driven,”Manriquez said. “[People] can actually sit down and see any maintenance problems, anything that’s off the ordinary and maybe [be] able to fix it online.”
The funds for financing this whole project came out of the budget given to the Irvine Unified School District by Prop 39, which was passed in 2012 by the California State Government. Aimed at “improv[ing] energy efficiency and expand[ing] clean generation in schools” (CA.gov), the law code takes a total of $550 million from taxes each year and gives it to any legal educational agencies for different energy conservation needs. Since UHS’s old HVAC system was unreliable and worn out, IUSD decided to spend this money allocated to them to revamp and replace the system.
Teachers have noticed a remarkable difference in the temperature and air quality of their rooms since the start of the school year.
“[Compared to last year] it’s not as cold in the morning, but it picks up after lunch which is nice because it gets hotter then and you can feel it,” Ms. Stephanie Chang (Math Dept.) said. “[The] 300’s building always had an [air conditioning] issue in the beginning of the school year. We had no air conditioning and we had to call and we were really sweaty. [But] this year, [there’s] no issue.”