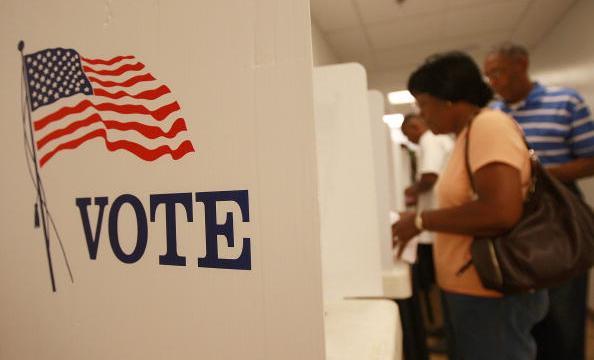 California voters cast their ballots for an election in their local area. (Photo by David McNew/Getty Images)


BY ALBERT JIA
Staff Writer
As the days pass and election day approaches, a single question looms over our heads: Who’s going to be the new president of America, Donald Trump or Hillary Clinton? It’s no secret that we’re faced with what many consider to be two unfavorable options, but why are these candidates so disliked among the American public?
The biggest issue that voters have with Hillary is her honesty, or lack thereof. According to The Washington Post, 68% of Americans believe that Hillary Clinton isn’t honest or trustworthy. An instance when her trustworthiness came into question was during her email scandal, in which she set up a private server to send and receive emails. According to Boris Epshteyn, a senior advisor on the Trump Campaign who appeared on an episode of “CNN Newsroom,” “She [Hillary Clinton] said the reason she used the private server was for convenience, that she only had one device, [but] she used thirteen Blackberries… and five iPads.” and after using said devices “they destroyed blackberries with hammers in the state department.” While people may be disinclined to believe information from the Trump campaign regarding Clinton, both of the claims were seemingly reluctantly confirmed by the CNN fact-checker on hand at the time.
However, Trump isn’t a shining beacon of hope for America either. There was an infamous incident in which he made fun of a handicapped New York Times reporter by imitating him during one of his speeches on the campaign trail. This was one of Trump’s most damning actions for his campaign, as he did what many Americans and news outlets called deplorable and then refused to apologize for it. Trump, like Hillary, also has a tendency to lie, as he was rated by Politifact.com with 17% of his comments rated as mostly false, 35% as false, and 18% as “pants on fire.” Despite the fact that many of his supporters think that “he tells it like is”, the truth is that he really doesn’t.
Now you may (or may not) be wondering to yourself why you should vote when the two candidates for president are almost equally abhorrent. But aside from the presidential ballot, voters also vote for or against propositions or measures in their respective states come election day.
This year in California Propositions 52, 63, and 64 stick out in particular, as they  deal with health care, gun control and marijuana legalization respectively. All three of these issues could spawn their own respective articles, but we’re going to focus on the fact these issues were cemented as part of Bernie Sanders’ platform. Bernie came up with his own solution to the health care problem in the U.S., suggesting that we implement a “Medicare for All” program. He also supports the use of medical marijuana and the decriminalization of the drugs recreationally used among adults. And although Clinton repeatedly mentioned that Bernie voted against a bill which allowed gun manufacturers to be held legally responsible for any crimes the buyer committed, Sanders has a D- voting record from the NRA, and voted in favor of background checks to prevent felons and the mentally from obtaining firearms.
While California already has an effective medicare system in place, Proposition 53 would improve it by directing more funding to help low-income Californians obtain health insurance. Proposition 63 would ban the purchasing of large ammunition magazines, and require that all individuals pass a background check before they can obtain a firearm. Proposition 64 would allow for the recreational use of marijuana in California, as medical marijuana use is already legal.
So, to all the Sanders voters in California who complain about a corrupt political system and want to abstain from voting due to said system, don’t sit there and remain figuratively silent. You have the option to make your voices heard on these three propositions and it’d be a waste not to go out and vote. Bernie Sanders never claimed that he would incite a political revolution by himself– he needs the help of local and state leaders to be a purveyor of change in our country.