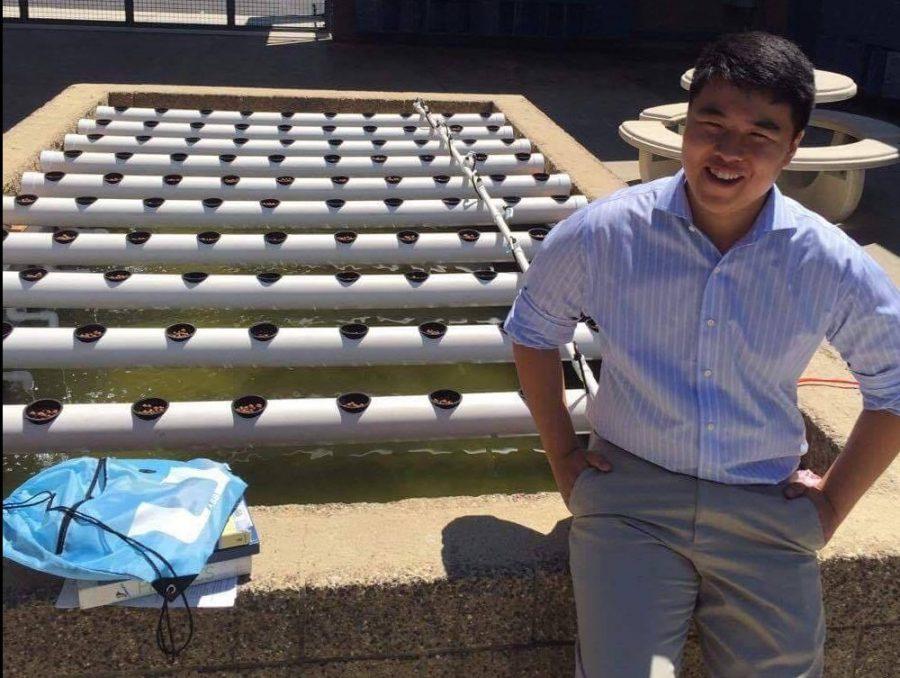 In an abandoned planter just outside the 500s building sits a seemingly haphazard collection of pipes and dirt suspended over a small pond. Bricks give way to white plastic pipes through which water constantly flows. At first glance, this seems to be an odd collection of plumbing equipment. Upon closer inspection, however, this outwardly inorganic contraption contains a surprising amount of life. Goldfish swim around in the pond beneath the pipes, and the water from the pond is diverted to little soil beds within the pipes; a few lettuce plants are already starting to sprout, their tender green leaves basking in the sun. This is the RPM Club’s newest project, Uni’s very own aquaponics system.
Aquaponics is a type of agriculture in which the waste produced by fish supplies nutrients for plants grown, which in turn purify the water for the fish. The system is mostly self-sustaining, requiring only electricity from a nearby plug to run the water pumps. Currently, it supports fourteen fish and will soon support nearly 60 plants. The entire system was student designed, funded and built over the summer by the RPM Club.
“I’ve always wanted to build an aquaponics system,” said club president Jack Ren (Sr.) “2 or 3 years ago, I built a small version with my dad in my backyard. So I thought, why not have one in school?”
However, it was a considerably larger task than Ren initially envisaged. The club encountered several hurdles on the way.
“Our biggest challenge was probably getting the club approved,” said Ren. “The school didn’t like our idea… They didn’t see the value of it at first.”
Eventually, however, Ren was able to convince them of its value to students as a lesson in project planning and engineering. Though the RPM Club was able to receive permission from the administration, their troubles weren’t over. A new problem soon took its place– a lack of funds.
“It took us nearly $800 worth of donations…to build this,” said Ren. The funds were raised through a variety of methods, including student and parent donations and fundraising events.
After securing the funding, the club started working during the end of the 2016 school year and continued over the summer in order to complete this project by the time school started.
“We spent three whole days digging the dirt out the planter,” said Ren. “We would come in for hours every day after school and dig.”
They completed the system after weeks of hard work, and finished installing it just before school started in the fall.
However, they aren’t done yet.
“We want to make this aquaponics system solar” said Ren, “Right now it uses electricity from the plug, but once we make it solar it’ll be 100% self sustainable.”
The RPM Club also plans to build aquaponics systems in the other seven unused planters. They hope that these projects will help members develop valuable life skills, such as people skills and time management. The club hopes that it can successfully cultivate leaders among students and prepare students for the future.
“The RPM club isn’t only helping students to become leaders and managers,” said Jack. “It also prepares students for life after college, when things that they learn back in school becomes more and more irrelevant as they step into adulthood.”