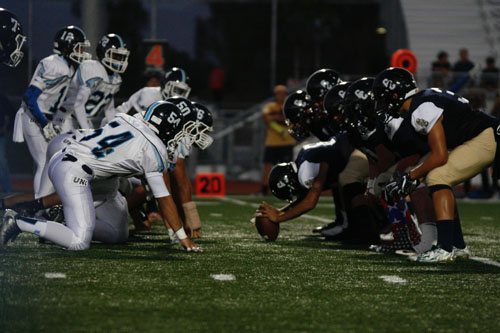 By JOE NAGY
Staff Writer
With a win over Calvary Chapel, the Trojans cruise to a 3-0 start topping the Calvary Chapel Eagles 42-13. Going into the game on a hot streak of 2-0 for the season, the Trojans were up against the 0-2 Eagles. Up against linemen that averaged 65 more pounds over each player, the offensive and defensive line stepped up more than ever.
The Trojans scored three touchdowns in a first quarter shutout. One of these touchdowns was an interception by Jalen Robertson (Sr.) which was returned 94 yards to complete the pick six. Reflecting back on the play, Robertson said “All that was on my mind was I have to keep going and I have to score one for the team.”
In the first half, Sam Winder (Sr.) fell on his knee while running up the middle of the field. Winder has undergone an MRI and is expected to get the results back this Friday. When asked what he thought about his injury, Winder said, “I’m pretty sure it is just a sprain and I should only be out for two weeks.” He is expecting to be back just in time to play Beckman, the first game of league.
Another injury occurred during the second half when Alex Pourdanesh (Jr.)  fell hard after a hit by an Eagle, causing discomfort in his left shoulder. Despite the pain, Pourdanesh decided to play through it and ended up recording two more touchdowns, totaling three for the night including an interception.
The win was not credited to any specific players but rather the offensive and defensive lines. Going up against a line that averaged 265lbs (MaxPreps), the defensive line was able to find away to pressure the Eagles Quarterback. Pourdanesh, noticed this lineman victory.  “We were worried about their size but we all showed up,” Pourdanesh said, “we could not have done it without our offensive and defensive line.”
If not for the conservation of starters’ health, Calvary Chapel would not have likely scored at all. The Eagles were scoreless until four minutes into the last quarter, when a majority of the Trojans left on the field were second and third string defenders. With much help from the offensive and defensive linemen, followed by interceptions from Robertson, Pourdanesh, and Darrius Outland (Sr.), the Trojans were able to have a houseparty of their own.
In the previous two weeks, the team defeated Laguna Hills, ranked 21st in O.C. (OC Varsity) and beat Pioneer High by a score of 37-0.