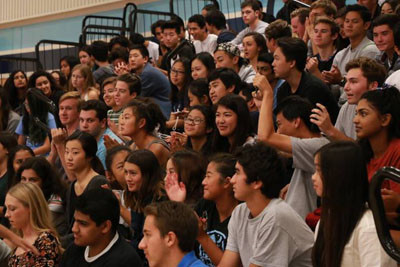 By EMMA SWAIM
Staff Writer
The Junior State of America club organized and moderated a school-wide debate based on a controversial issue regarding whether or not federal restrictions of access to firearms would reduce the number of mass homicides per year. The debate included two predetermined main pro and main con speakers as well as subsequent speakers for both sides who were selected from the audience.
The main pro and main con speakers were Cameron Diiorio (Sr.) and Chris Flattum (Sr.) respectively. Subsequent speakers for the pro side included Sam Grigg (Sr.) and Ethan Klein (Sr.), while subsequent speakers for the con side included Brian Lee (Sr.) and Neah Lekan (Jr.).
Arguments on the pro side of the argument emphasized mass tragedies and gun legislation loopholes that allowed for them to happen.
Diiorio began her argument with a story about a mass homicide to explain her support for stricter gun laws. “Gun control is necessary because all of these recent massacres and tragedies [we’ve seen and heard of] could have been prevented if [our federal gun laws] were [more restrictive],” Diiorio said.
Klein argued for the need to expand the National Instant Criminal Background Check System to private gun sales and to prevent people on the No-Fly List from acquiring guns. “We need to reform the universal background check system, ban No-Fly List people from buy guns, and ban assault weapons,” he said.
Arguments on the con side of the argument focused on the inefficiency of gun control which arguably would allow criminals to acquire guns regardless.
“Gun control only hurts the law abiding citizens who want to have guns for their safety,” Flattum said. “Mass homicides can only be prevented with more [access to] guns.”
Keyan Kazemian (Sr.), one of the co-presidents of JSA, thought the debate was important because it opened the minds of students. His counterpart Cali Bacino (Sr.), the other co-president of JSA, agreed that the debate opened up student discourse.
“The debate was a success not necessarily because it was a controversial topic, but because the students committed considering different points of view,” Kazemian said. “Our school is quite liberal in nature, but listening to the full spectrum of opinions on gun control really helped give students a more complete perspective on the different solutions to limiting gun violence.”
“The amount of discussion that [the debate] sparked definitely surpassed our expectations and we loved seeing that happen,” Bacino said. “We will be having another debate – one that is equally thought provoking and controversial – soon and we hope to get even more students involved and speaking.