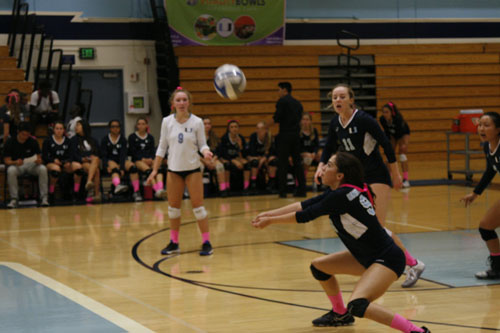 By BEN HANSEN
Staff Writer
Girls Varsity Volleyball lost to Northwood High School by a score of 0-3 on Tuesday night, October 5. It was the Trojans’ annual pink-out game for breast cancer awareness. The breast cancer survivors who attended were honored in a special pre-game ceremony by the players.
The Trojans got off to an early 4-0 lead and both teams were tied 17-17 and 20-20 a piece during the first set yet the Timberwolves pulled ahead, taking it 25-22.
Left side hitter Bella Oldham (Sr.) and right side hitter Kira Cashman (Sr.) racked up the points for the Trojans.
A lead change occurred when UHS took a 8-7 lead in the second set, but Northwood soon recovered and the Trojans lost 25-12.
Libero Klaire Thoman (Jr.) had two strong diving saves which further contributed to the extension of University’s possessions throughout the game.
The Trojans were defeated in the third set 25-17.
Despite the loss, UHS looks forward to continue competing in league.
“Although we lost yesterday, even though it may be a challenge, we still have a shot of making it to CIF” IVC commit hitter Alma Enteresi (Sr.) said.
The Trojans’ next home game is against CDM on Thursday, October 6.