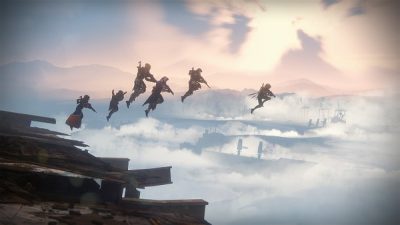 Destiny: Rise of Iron is a major expansion for Bungie's first-person shooter, Destiny. The expansion was released on September 20, 2016, as the fourth expansion of Destiny. (Handout/TNS)


By ALEX XU
Staff Writer
Destiny: Rise of Iron is a multiplayer console game for Xbox and Playstation. It bridges the genres of FPS and MMO, offering gameplay unlike most other console games. It is developed by Bungie, the same company that created the Halo franchise. Destiny was initially released September 9, 2014 and has had a total of four expansions, the latest one being Rise of Iron, released on September 20, 2016. Rise of Iron costs $30 if the previous expansions have already been acquired, or $60 if buying anew. The launch of Rise of Iron initially received positive community feedback but average critic reviews.
For those unfamiliar with the Destiny world, the premise of the game is that the player plays as a customizable character, known as a guardian, with a mission to restore Earth to its former glory. Guardians are accompanied by a Ghost, an AI who is an embodiment of a fallen god. Guardians wield power given to them by a celestial being, the Traveler, in an attempt to defend Earth’s last human city and revive the Traveler. Players travel to worlds throughout the solar system, hunting down threats to the safety of humanity.
When the initial game was released, the guardian was supposed to be a character that the player would stay with throughout the entirety of the game’s ten year lifetime. The guardian was supposed to be an embodiment of the player and a focal point of the game’s story. However, until now, the guardian was mostly a silent voice in the background, only speaking when absolutely necessary. Rise of Iron changes that; the guardian now takes the lead, becoming the focal point of the new campaign.
Speaking of which, the campaign is simply incredible. I’m personally not much of a PvE (Player vs enemy) player, but the campaign was just a step above any game I’ve ever experienced. In terms of its design and value, I’d put it almost at the level of Halo Reach’s story in terms of its storytelling and cohesiveness. The cinematics are beautiful, showcasing the scope and grandeur of the new areas, and the dialogue really cemented the guardian in the Destiny universe. In addition, Ghost, the in-game AI, has a plethora of humorous dialogue; Bungie was kind enough to even throw some easter eggs into the mix, giving players some not so subtle references to player behavior in the game. As an example, Cayde-6, the mentor of the hunter class, makes a comment about how guardians are always jumping on his table to get quests instead of walking around like normal humans.
Along with the great design and character dialogue, the greatest part of the Rise of Iron game is after the campaign concludes. Players unlock multiple questlines that serve as continuations of the main story. These quests do an excellent job of fleshing out the main storyline. For example, one of the quests involves rebuilding the very first gun acquired in the game, and the sheer detail put into that storyline is absurd. For example, the conclusion of that questline has Ghost reflecting on what it means to be the player’s companion, and it was an incredibly poignant moment. He talks about the struggles that AI of his kind face, and for perhaps the first time since Destiny’s release, the personal side of many characters is seen.
Overall, Rise of Iron does an excellent job of developing the story of the game, while keeping the excellent gameplay from previous expansions. Particular bright points are the weapon quests and the raid; everything Destiny players ever wanted from an expansion has been given to us. I highly recommend getting it if you’ve played Destiny in the past. If you haven’t already played Destiny, now’s a great time to start.
Delete Image
Align Left
Align Center
Align Right
Align Left
Align Center
Delete Heading