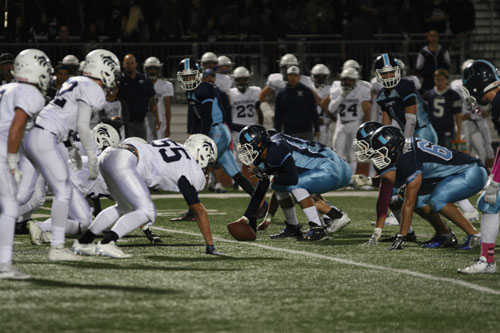 Trojan offense lines up on 4th and 11 and goes to get a first down with time ticking in the 4th quarter. (J.Nagy)

By JOE NAGY
Staff Writer
UHS defeated Northwood 24-21 and continues the season 6-1. A last second field goal by kicker Nick Loveland (Sr.) resulted in the win.
With only seven seconds left and the score tied at 21-21, Loveland came out onto the field to kick the field goal. After making it from 22 yards out, the score was 24-21 with three seconds to spare.
“It was awesome being able to make the game winning kick and I love my team for counting on me to step up,” Loveland said after the game.
The game itself was close from start to finish. After no team had scored in the first half, the Trojans struck first on a long run by running back Clark Smith (Sr.), only to be followed up by a touchdown from the Timberwolves on the next drive.
The score remained 14-7 at half-time and tied 14-14 after a Northwood touchdown in the third quarter. The Trojans then scored right after on a kickoff return from cornerback Jalen Robertson (Sr.). Heading into the final quarter, the score remained 21-14 with UHS on top.
Northwood would answer back with a run up the middle less than five minutes later. After going back and forth, they faced a fourth and one on their own 30 yard line. The decision was to go for it, and as the Timberwolves’ running back ran up the middle, he was stopped by three Trojans.
The Trojans finally had the ball with merely two minutes and five seconds left in the quarter. After attempting to run the ball, UHS was stopped with nowhere to move.
Quarterback Thomas Keeling (So.) passed to wide receiver Darrius Outland (Sr.) for a 13 yard pass, resulting in the first down. With less than a minute to play, UHS ran the ball twice up the middle and finally spiked the ball to stop the clock.
Key player running back Smith had two touchdowns, one of which was for 70 yards the other for 38.
“I credit the blockers who really stepped up and created holes for me to run through and make big plays like the ones tonight,” Smith said.
After tonight’s win, the Trojans are now tied for second in a four way tie in Pacific Coast League.
“We will always be happy for a win,” Coach Mark Cunningham (Athletic Dept.) said. “Although we did not play how we wanted to, there were certain plays like the fourth and one where our boys stepped up and that shows their character.”
Next week, the Trojans’ face number one seed Corona del Mar in what is expected to be a hard but good game.