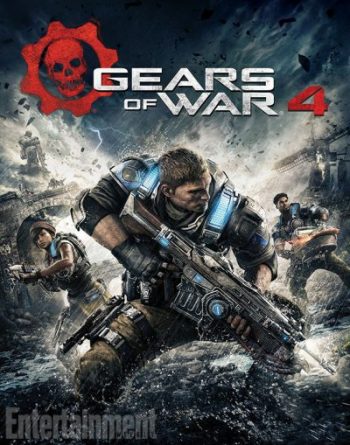 By JENSEN LIM LEONG
Staff Writer
Gears of War 4 is an exclusive Xbox/PC third person shooter made by The Coalition and is the fourth installment of the Gears of Wars franchise. The first three games were made by Epic Games. Gears of War: Judgement was created by People Can Fly and met with lukewarm reception from fans and critics alike; therefore, some do not consider it part of the main franchise. This new installment from The Coalition achieves a solid reboot.
As a reboot, it mimics what Star Wars Force Awakens and Star Trek (2009) did; it uses characters from the original games to pass the torch to these new characters. The six to ten hour campaign follows characters JD Fenix, Kait and Del as they try to rescue JD’s father Marcus, the main character from the first three games, and Kait’s mother. Both are abducted by the Swarm, which are reskinned enemies from the original games. The story is written in a typical three act fashion: the first act is devoted to escaping the debunked Coalition of Gears (COG), which is now a machine army, the second is devoted to rescuing Marcus from the Swarm and the third is teaming up with Marcus to find Kait’s mother.
Several new features are added to the game despite its consistency with the originals. The COG is composed of robots that play nothing like enemies from the original games, and there is a nice variety to bosses and great set pieces.. Two standout levels are one where the player escapes by motorcycle after meeting up with Marcus and the final level where the player controls huge mechs, or titan-like robots, to fight one giant final boss. The plot does have some issues, mainly that it leaves many storylines unanswered and feels more like setup for a future game. Compared to past games, Gears of War 4 is more personal because it is a search for a two people, not an all-out war. But even with that change, the game still feels relatively the same.
Gears of War 4 does not make any drastic changes to the gameplay, but rather fine tunes the old mechanics so that they play like a dream. Slight changes to old weapons, accuracy and power are definitely noticeable. Some great additions are that pistols can actually do some damage now and weapons that had a huge recoil initially are easier to control.  The graphics make Gears of War 4 one of the best looking games on the Xbox One to date. Textures, lip reading, voice acting and set pieces are better than ever.
Gears multiplayer has not changed in years, even with new weapons and small tweaks in power, and accuracy most of online player-versus-player games rely mainly on the shotgun. Some players like it and some do not, and personally, it is not the best part of Gears.
The best part of Gears is the return of Horde Mode or Horde 3.0.  Horde Mode has been a beloved mode ever since it was introduced in Gears of War 2. Many games have tried to copy the level design, but they never have the same feel or touch. Horde revolves around a group of five players attempting to survive 50 waves of computer enemies with a boss wave every ten waves. In Gears of War 3, tower defense elements were introduced, like turrets and barriers, in set places. With Gears of War 4, classes, shared cash, plus the ability to make a base anywhere or place barriers and turrets anywhere were added as well. The different classes are Soldier, Sniper, Scout, Heavy and Engineer. This adds more freedom to how the mode is played and allows the player to play the way they like. With shared cash, it allows those who like building defenses to be engineers and those who like to kill enemies to be soldiers. There was a bit of backlash for the inclusion of a class system, but the classes do not lock the player into certain weapons like in Judgment; it only provides a small boost to certain classes. There also is no requirement for each player to be in one class. If a team desires, they can have five soldiers.  The Engineer class receives cost reductions on fortifications, and the Heavy class receives a damage boost for heavy weapons like the Boomshot (grenade launcher). I have yet to get to Wave 50 with my friends, but playing Horde is just as fun as we remember.
This is not to say the game is perfect. One nearly infuriating game addition is the inclusion of microtransactions.  All skins, with the exception of preorder bonuses, are only obtainable through this new pack system. These packs have skins, horde abilities for classes, emblems and bounties that give extra experience points after their specifications are completed. These packs can be earned through normal gameplay, but it is glacial compared to buying packs. It takes a few hours to earn enough coins to get a skin pack.
While Gears of War 4 adds nothing significantly new, it fine-tunes everything to a point so that the game is just a whole lot of fun. With duds like No Man’s Land and The Division, Gears of War 4 is one of the better games of the year and definitely worth the time to pick up.