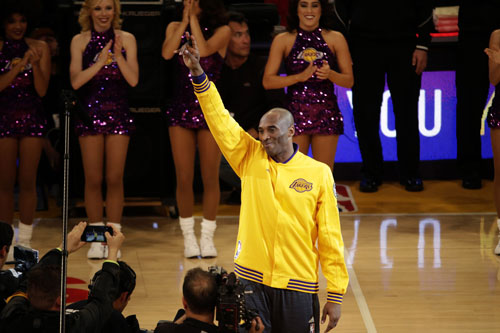 
By BEN HANSEN
Staff Writer
This season, the Lakers are missing a certain first ballot hall of famer. After playing on the team for the last 20 years, Kobe Bean Bryant has officially handed the keys of Staples Center to a rising young core lead by number two draft pick D’Angelo Russell and Julius Randle.
The Lakers’ franchise is undergoing transitions to build a winning team for the future. Since June, this young core is now in the hands of new hire Luke Walton who is coming off of a finals appearance as the Golden State Warriors’ assistant coach.
“I feel that although they have a young team this year that they can persevere and rely on the great coaching of Luke Walton” said Josh Lambert (Sr.).
As a player, Walton is known for his time on the bench, except now he’ll be in a suit instead of a uniform. Luke coached Los Angeles to a 123-116 win over Atlanta on Wednesday, November 2.
“They’ll play the right way, they’ll play a good brand with his IQ. So I would be excited if I was in L.A,” Warriors assistant Bruce Fraser said to the Los Angeles Times. “They’ll communicate, they’ll have fun without the working culture and they’ll be competitive, have that competitive spirit.”
Even with all the changes made by Jim Buss, co-owner of the LA Lakers,  the franchise still plays in the same arena that sports 16 championship banners, five courtesy of the Black Mamba. In his farewell season, Bryant was the spotlight always in the limelight city to city, which took attention away from the young guys like D’Angelo Russell. It is different now as Russell looks to rise just like he did at Ohio State.
“We’re all about playing together now,” he said to CBS Sports. “It’s not about one guy anymore. It’s about sacrificing for the team. Kobe deserved every bit of attention he got in his last year, but there’s freedom in Kobe not being around.”
Lakers fans at UHS and beyond are excited to see what is in store for their home team this season.
“Personally as a laker fan I am very excited for what could be potentially a very good team within a couple of years. Right now they have a bright young core four,” Farbod Markazi (Sr.) said. “Once they develop and learn how to play together as a team as well as sign strong role players, the purple and gold will be striving once again.”
Despite Kobe’s retirement, the Lakers stride forward with a new coach, a young rising core, and a new culture to build a foundation to compete in the Western Conference.
Delete Image
Align Left
Align Center
Align Right
Align Left
Align Center
Delete Heading