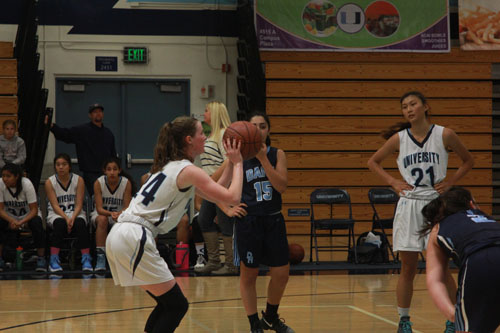 By SHIVAM SUDAME
Staff Writer
Girls Varsity Basketball lost in their pre-season matchup against Dana Hills 57-68. Despite the large margin, however, the scores didn’t match the competitiveness of the game. UHS entered the fourth quarter tied with Dana Hills, but a defensive collapse allowed Dana Hills to score 29 points in the fourth to seal the victory.
Missed chances were the key factor in the Trojans’ loss. The team got to the line 30 times, compared to Dana Hill’s 19. Yet those trips ended in only 17 points for UHS, as they shot a lowly 56.7 percent from the charity strike.
The team’s FG percentage was 36.5, and their three-point percentage was even lower as they shot 2 of 15 from beyond the arc. On a positive note, getting to the line to shoot 30 free throws means that an improvement in free throw percentage could provide an extra source of offense for the team, opening up easier opportunities around the floor.
Point guard Malia Goldsmith (So.) and small forward Karissa Shin (Jr.) provided the bulk of UHS’ production, offensively and defensively. Shin led the team with 13 points, while Goldsmith scored eight of her 12 points from the line. They both had four steals, and Shin crashed the boards, ending with 10 rebounds.
Despite the loss, the team is still feeling good about the upcoming season. Shooting guard Ashley Chandler (Jr.) said, “Even though we lost, I feel good that our team will come back strong and meet our potential.”
The Trojans now look to their next games in the South Coast tournament this Friday, December 2.