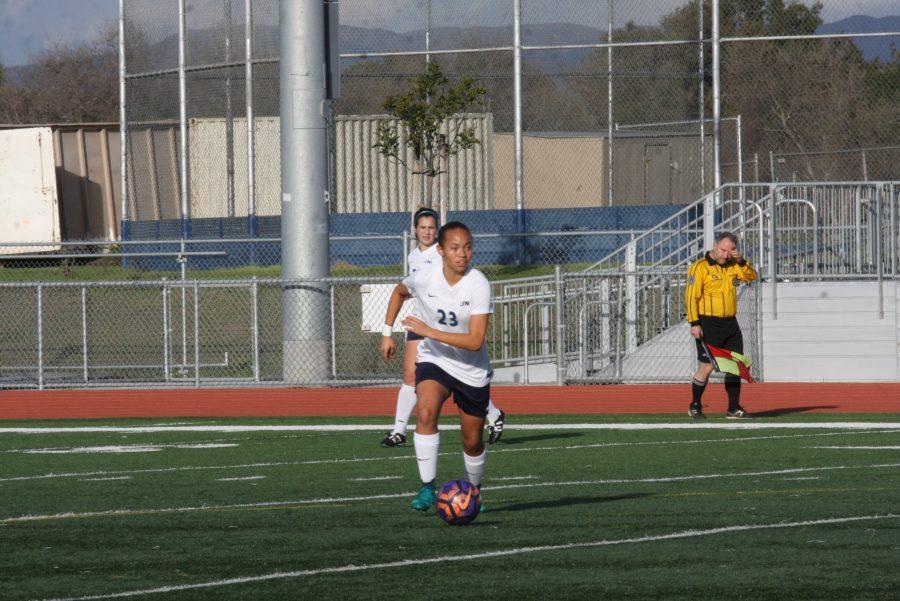 By LAWRENCE XU
Staff Writer
Girls Varsity Soccer defeated Irvine on January 24 with a score of 4-2. With this victory, the team is currently 12-4-2 overall, and 3-1-1 in league.
The Trojans and Vaqueros were neck to neck in the first half, with neither team scoring many goals. Amanda Kutcher (Fr.) broke the stalemate by scoring in the 19 minute. Using the goal as motivation, UHS pressured the opposition and attacked on offense.
During the first half of the game, the team attempted ten shots, with five goals on target, and two corner kicks.The girls played more aggressively in the second half. Emma Goolsby (Jr.) scored in the 52nd minute, followed by Remy Kaufman (Jr.) scoring their third goal in the 60th minute. This brought the Trojan lead to   3-0.
“We picked it up in the second half and the goals that were scored were really nice,” Vicki Chen (Sr.) said.
The girls however let their guard down slightly after the three goals, allowing Irvine to score one point in the 74th minute. Soon after Lauryn Wood (Jr.) scored a clean goal inthe 76th minute, eliminating any comeback attempt by Irvine. In the 80th minute Irvine scored a final goal  bringing the score to 4-2 in favor of the Trojans.
“We played a great game and we’re looking forward to playing Beckman on Thursday.” Brooke Su (Sr.) stated.
The team is currently placed second in PCL, and they are looking forward to have a successful season.