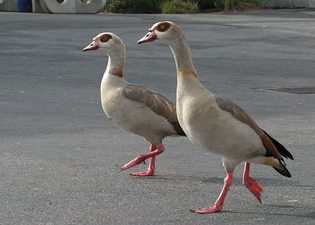 By AVA WELSH & JANE HAGEN
Features Editor & Managing Editor
From the ever-present crows to this year’s addition of the pond fish by the RPM club, UHS campus is host to a wide variety of creatures, including one very specific pair of feathered friends: the geese.
Most every student on campus has, if not interacted, at least seen these unique birds waddling across the campus, but few know their origin story.
Egyptian Geese are the most widespread of all the African waterfowl, originating from South Africa around the Nile River and Sahara. They were first introduced outside their home to England in the 1700s.
However, the Egyptian Geese seen on the UHS campus and around Irvine have a more interesting and local story.
A drive-through safari park called the Lion Country Safari was open from 1970-1984 in Laguna Hills just across the 405 freeway from the Irvine Spectrum Center.
Three pairs of Egyptian Geese were brought to the park, but fled soon after arriving. According to Bird-B-Gone, it is likely that the Egyptian Geese in the Irvine area are the descendants of the three mates.
While there is no exact explanation for how UHS’s local birds found their way to Irvine, or if they are indeed from the original shipment to the Lion Country Safari park, the legacy of these birds remains intact.
From their bright orange wings to their strange circled eyes, these birds certainly stand out against the other birds (mostly crows and the occasional seagull) on campus.
“I love the geese, I think they’re hysterical,” said Alice Liu (Sr.), “they’re funny looking and cute and I always like to watch them run around campus and try to take pictures of them.”
Sharing Liu’s sentiment, Naomi Efron (Sr.) shared her fondness for these animals, saying, “I think the geese are great! They remind me of an old married couple and I even gave them names: Herman and Rosalyn. Whenever I see them around campus they always make me laugh.”
However, despite how much these birds stand out, they live a relatively peaceful and quiet life on campus.
“I’ve been here 18 years and the geese have been here the whole time.” Carlos Lopez (Security) said.
“The only time I’ve ever see them get agitated is if a student is up close and bothering them. But mostly they keep to themselves, we only keep kids away if they’re feeding them, but other than that the geese aren’t bothered.”
Students and faculty alike share a wide variety of sentiments about these birds, some love them while others go out of their way to avoid them. Even if they themselves don’t personally dislike the geese, many people on campus find them to be more of an annoyance than anything.
“The biggest thing I hate about the geese, is the amount they poop. Especially on the soccer field,” Dominic Fratantaro (Library) said, “I mean I think they’re terrifying as well, but that’s the biggest inconvenience for the team and me, especially during soccer season.”
Despite these ideas, the geese have a clean rap sheet here on campus, and Barbara Vasquez (Security) said, “The only time we ever interfere with the geese, really, is if one is ever hurt. If that happens we alert Animal Control and let them take over the situation, other than that we aren’t really involved with them.”
These birds aren’t only present on UHS campus, but are prominent around Southern California, making headlines in the OC Register and becoming a staple bird to be spotted at the San Joaquin Wildlife Sanctuary Bird Checklist. But, however wide they spread their wings, these birds will always be a centerfold of UHS wildlife on campus.
“They hinder students occasionally, sometimes I hear them during tests and it distracts me or they slow traffic when they get into the parking lot,” said Tanya Malkani (Sr.), “but I still like them, they don’t bother me and I don’t bother them. They’re a cool addition to our campus, chilling on their own, so I would definitely say I like them.”
Delete Image
Align Left
Align Center
Align Right
Align Left
Align Center
Delete Heading