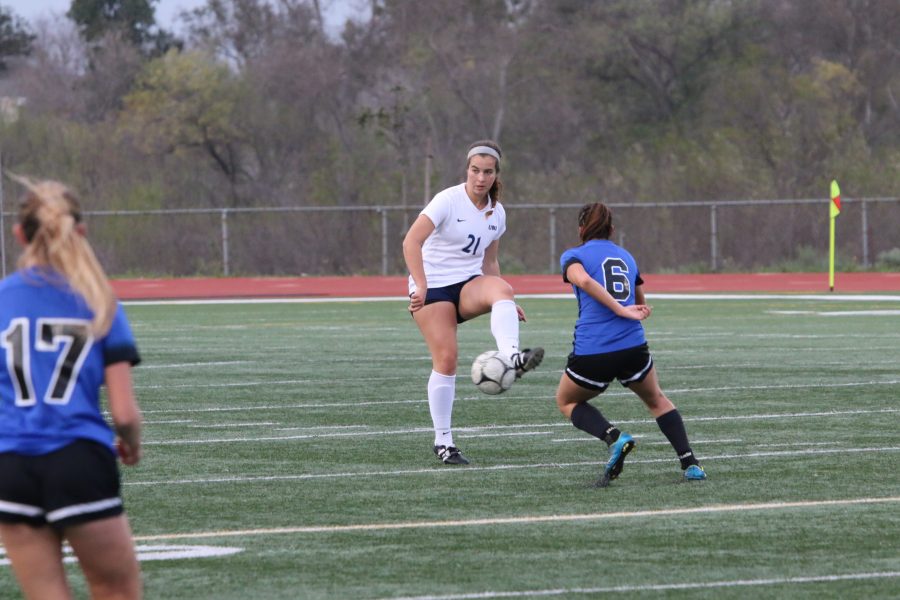 By VANESSA TIAN
Staff Writer
Girls Varsity Soccer advances to quarter-finals after defeating Pacifica High School 4-1 on Tuesday. This is is the first time the Girls Soccer program has advanced to the quarter-finals of CIF.
“I’m super proud of our team for making it this far,” co-captain Paige Metayer (Jr.) said. “I don’t think anyone really expected this from us, because this is one of the first times in our program that we’ve gotten this far. We’re all really excited about this”
The team was organized and communicated well throughout the game. “We had a very specific game plan and we did a good job of following that to a T. We did a really good job of playing to our strengths,” head coach Ignacio Cid (Athletics Dept.) said.
UHS got an early lead, scoring 2 goals within the first 20 minutes of the game.
“I think we played a lot more direct, and we got a lot more chances to score by playing bigger than we usually play,”  Metayer said. “We’re used to keeping it more tight and short but this time we really opened it up.”
Next for the team is CIF quarter-finals against Temecula on Friday, February 24. “We want to focus on each game one by one but hopefully we can make it to the finals.” co-captain Kiana Ghamarifad (Sr.) said.
Coach Cid, “I think we’ve done a great job this year. It takes a lot to get a group of people that are in different grades and lead different lives to become a group, and they did a really good job of that. I’m happy that the girls get to enjoy it, and everything else is just a plus.”