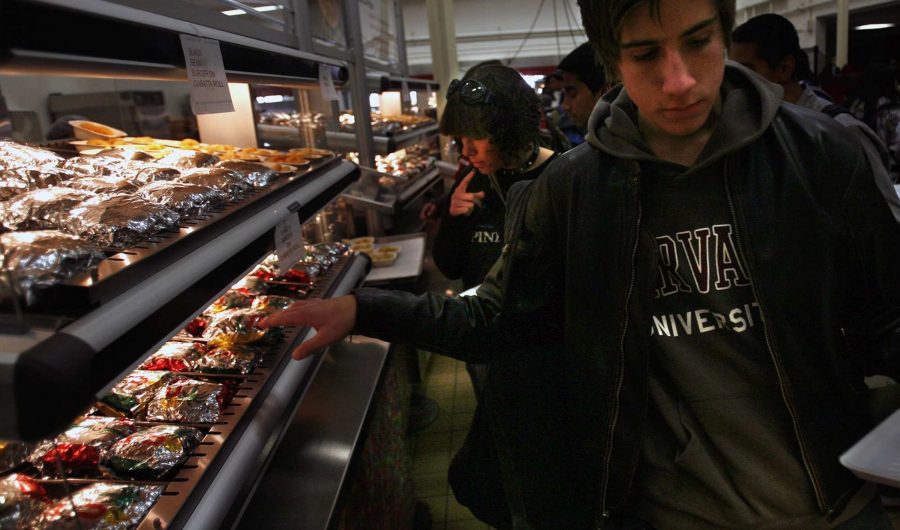 
By EIRENE DING
AP Lang Student
Students nationwide generally agree that cafeteria food is rather unpleasant. An anonymous underclassman resignedly said that she was not happy with the cafeteria food due to its unusual taste, “but it’s better than not having a lunch.” On the opposite side of the country, east coast students feel the same way we do about school food. Philly Voice reporter Michael Tanenbaum interviewed Philadelphian high schoolers, who responded with brutal honesty. One student remarked that “sometimes the food doesn’t taste real” while another emphatically commented, “It’s just bad!” when asked about the pizza. With this longstanding dilemma of less than desirable cafeteria food, shouldn’t the education system have done something about it by now? Since high school is a vital period of growth and development for students, their nutrition should be of the utmost importance. However, our cafeteria food is no better than the other dismal options served at schools across the nation.
I have been sold expired food and drink at least three times. I say at least because there were probably other times that I simply didn’t bother to check the expiration dates on the food items I bought, because I assumed that although the food may not taste the best, it would at least be somewhat fresh. Looking closer at the selections available at the food counter reveals something rather disillusioning; the fruits and vegetables that are now required to be provided are either limp and have clearly been sitting out for a while, or are so unripe they can’t even be peeled, and the hot meals look like plastic that has been haphazardly reheated in the microwave, leaving only the processed snacks as a viable option.
Recently there has been a shift to make cafeteria food “healthy”. The items served contain supposedly healthier ingredients or are reduced fat. This new labeling of food is not fooling anyone; how can a pop tart suddenly become healthy just because now the crust contains whole grains? The updated menu is only healthier on the surface level and does not provide true improved value. Jennifer Tseng (Jr.) has also noticed the increased focused on health, but she feels as if more students are just “skipping cafeteria food and buying vending machine food.” She finds the so-called nutritious meals “poorly put together.” Another element of the reform resulting from the increased attention paid to health involves ordering students to take one fruit or vegetable with every meal. In theory, this practice is good idea, but in reality, no one eats this extra item; everyone dumps it in the bin for shared, unwanted food, leading to unnecessary food waste along with no noticeable effect on student health. Furthermore, the cafeteria meals often cause stomachaches, and many students would rather skip lunch than eat school food. The only things that taste enjoyable are the unhealthy snacks, so students end up eating many of those. Anika Tasnim (Jr.) voiced her concern over the fact that the cafeteria usually runs out of what the majority of students consider “good food”—good for cafeteria food, at least. After running out of the more desirable meals, the remaining students are forced to eat something stale that has minimal nutritional value, or to not eat at all. Tasnim continued, “The food has no taste! If we are paying for it, it might as well be good food.”
California Food Advocates stated that the federal school nutrition programs, such as the National School Lunch and School Breakfast programs, do increase access to nutritious food for children. Nutritious school meals have a positive impact on student health and academic achievement. In addition, ensuring school meals are nutritious and accessible helps to ensure that California kids, including the more than 2 million low-income students who participate in the National School Lunch Program, are “healthy and successful!” This may be true for schools that actually provide healthy food, but ours is not one of them. Our school offers so many unhealthy snacks, such as ice cream, and more recently slushies, in both the cafeteria and the various vending machines on campus, revealing a bias towards earning money, which the school holds in higher esteem than the health and wellbeing of its own students. Our school needs to make a genuine effort to resolve the food predicament. School is stressful enough—students, who are suffering from the current cooking, should not have to worry about how they will find nutritious food.
Delete Image
Align Left
Align Center
Align Right
Align Left
Align Center
Delete Heading