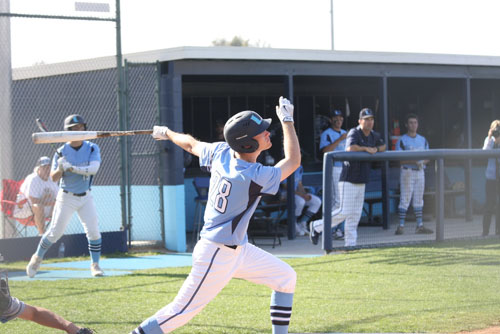 By JOE NAGY
Staff Writer
This past Tuesday, March 28, Varsity Baseball faced the Irvine Vaqueros in a grueling game where only one run crossed the plate. University won 1-0 to make their record 2-3 and tied for third place in PCL.
The game was close going into the sixth inning with the score knotted up at 0-0. The game being a pitching duel, the Trojans were only able to get six base runners on base, leading up to the bottom of the sixth. Starting shortstop Andie Masotto (Jr.) would be the first to break the tie on an RBI SAC fly. Peter Vu (Sr.) reached on an error earlier in the inning and advanced on a bad throw, allowing for the tie to be broken.
When asked on how he felt getting the game winning RBI, Masotto said, “I was happy I was able to capitalize on the situation and come through for my team.
The win would not have been possible if it was not for the outstanding performance by star pitcher and Captain Jacob Collins (Sr.). Collins was able to pitch a complete game shutout, the first shutout of the season for the Trojans. He was able to do so by only allowing one hit all game.
After pitching one of his best games of his four years of Varsity, Collins was very ecstatic about his performance and his team. He said, “It felt great getting the win and we all played really solid defense.”
The win was the first game all season where the Trojans defense did not allow one earned run. Varsity Baseball is looking to win consecutive wins for the first time as they face off against the Warriors on April 11, the other team they beat earlier in the first week of league.
While the Trojans have a week till their next league game, both JV and Varsity are set to play in tournament games throughout spring break.