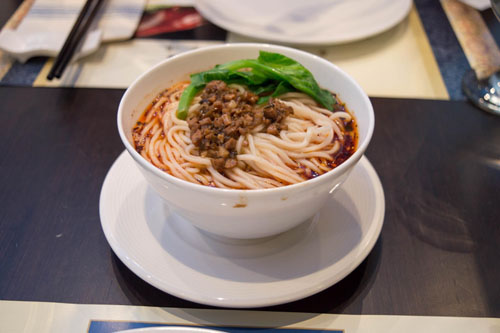 Dan Dan Noodles with gailan vegetable and small scoop of diced meat on top is a must at Meizhou Dongpo. (L. Xu)

By VICKI LI & LAWRENCE XU
Staff Writers
We know what you are thinking: this name doesn’t look like it has good boba, photogenic desserts or fancy fusion cuisines; should I keep reading? Well, it actually doesn’t have any of these, but you should still bear with us and find out why we like it so much.
Before we get started, here’s a little background information about ourselves. Other than not getting sponsored and not being funny, I guess you could say we are the Sword and Shield equivalent of the Buzzfeed Try Guys. This time, we decided to step up our game and try out this new, high-class Chinese restaurant.
We know we lost some of you just now when we said Chinese restaurant. This restaurant not only has traditional Chinese cuisines but also offers Western dishes such as beef filet with black pepper. So even if you are not Chinese or not even Asian, we strongly recommend you to see for yourself and try out some of their signature dishes after reading this article.
Meizhou Dongpo (pronounced MAY- chou DONG- puo) was first opened in 1996 in Beijing, China. Since then, it has grown rapidly and now has more than 30 locations in China. The Irvine branch is its 4th location in Southern California.
Knowing its popularity, we arrived at the restaurant around 11:20 am, 10 minutes before it opens for lunch. A crowd of roughly 30 people had already gathered in front of the door, and the receptionist was busy giving out tickets and recording the sizes of parties. Luckily, a couple decided this was not their thing and gave us their number.
Our number was called as soon as the restaurant opened. Facing the door is a self-serve wait station with water and light snacks. The restaurant is really spacious. Several rows of shelves divide the space into sections and lanterns are suspended from the ceiling. Little kids stand in front of the glass window to the kitchen. The kitchen is very neat and clean with food and equipment stored orderly.
We ordered the Meizhou Roast Duck, Pork Belly, Shumai, Dan Dan Noodle and Wonton Soup in Chili Oil first. Instead of writing down our orders and going back to a computer to input, all waitresses have a tablet on which they can input the orders at the table. Unlike other Chinese restaurants around, it prints you a slip of paper with all your orders on it, so you know what’s yet to come and keep your expectations up.


Our first dish, Dan Dan Noodle, arrived in less than 10 minutes. The dish was served in a medium sized bowl, with a little scoop of meat and a piece of gailan (a leafy Chinese vegetable) on top of the noodles sitting in a medium hot soup base. Another dish, Wonton Soup in Chili Oil, similar to Dandan Noodle, is served in medium hot soup base with a piece of gailan on top.

These two were our favorite dishes served there. The spicy soup base is different than any dishes from other cultures. As the name of the soup suggests, Chinese chili soups and sauces comes with a thick layer of oil. Before eating both dishes, we could see the layer of oil and ground chili floating on top of the soup, which was enough to make us nervous about eating a lot at the same time. We 10/10 recommend eating these two dishes slowly because we were still not ready for the spiciness even with mental preparation.

The third dish to come up was the Pork Belly. The pork belly with skin is cut into slices and laid atop a mixture of meat and shredded pickles with peppercorn and mild chili oil. Most people will finish the pork belly slices and not touch the mixture because it doesn’t taste as pleasant as other dishes. In reality, the pickle mixture is a perfect combo with rice or noodles. The mild chili oil with peppercorn taste maintains a strong, exciting flavor when eating noodles or rice. Our fourth dish, Shumai, is one of the few steamed foods from the restaurant. It’s in many ways similar to steamed dumplings. The skin is the same, and the meat in the middle can vary the same way as dumpling fillings. What makes it different than dumplings, however, is that Shumai will have soup flowing out after biting down on it. It is suggested to drink the soup along with the first bite to get the full taste of Shumai.

The highlight of the meal, Roast Duck, came last, It was sliced at a table near us and served with thin sheets of wrap, scallions and Peking Duck Sauce. It met our expectations. The skin was crispy and the meat was loose. The flavor was overwhelming in a good way and reminded us of Peking Duck we had in China.
Our dessert, White Fungus Stew with pear and date palms, is one of four desserts on the menu. The white fungus is cooked with jarred pear, making the soup have a slimy feel, and the date palms are added later. The soup was served cold, in a bowl about the same size as the noodle and wonton soup we ordered. The soup itself is kind of sweet, but eat it with the white fungus and it will taste just right. It was able to cool us down, especially well after eating the two spicy dishes. It is the best dessert to get for those that have a hard time dealing with spicy food but also want to enjoy the signature dishes served at the restaurant.

Other popular dishes includes the Salt and Pepper Crab.
“It is one of my favorite dishes,” Jennifer Yao (Sr.) said. “The meat inside the crab legs is extremely tasty.”
The American location made us nostalgic and brought up memories of when we visited the restaurant in China. Nevertheless, there are some changes. Just looking at the building, we realized they do not have a separated snack section. The locations in China are generally split into two sections, one with fancier interior design and bigger, more expensive items, and another section focusing on smaller items such as snacks and desserts. The snack section was our favorite part about eating at Meizhou in China. It’s cheaper and the smaller portions allowed us order a greater variety of items. The second noticeable difference is the menu. Compared to the giant menu in China with a huge variety of items, the restaurant here brought only a few of the most popular items served in China and created a more simplistic menu. Besides the general differences, the Irvine branch lacks a few of our favorite dishes. The one dish that I miss the most, Bingfen, a traditional summer dessert served in the Szechuan region, was not on the menu.
The restaurant is on the pricier side, which makes it not an ideal location for any quick meal, but it brings out the most authentic Szechuan style food and is definitely worth a try!