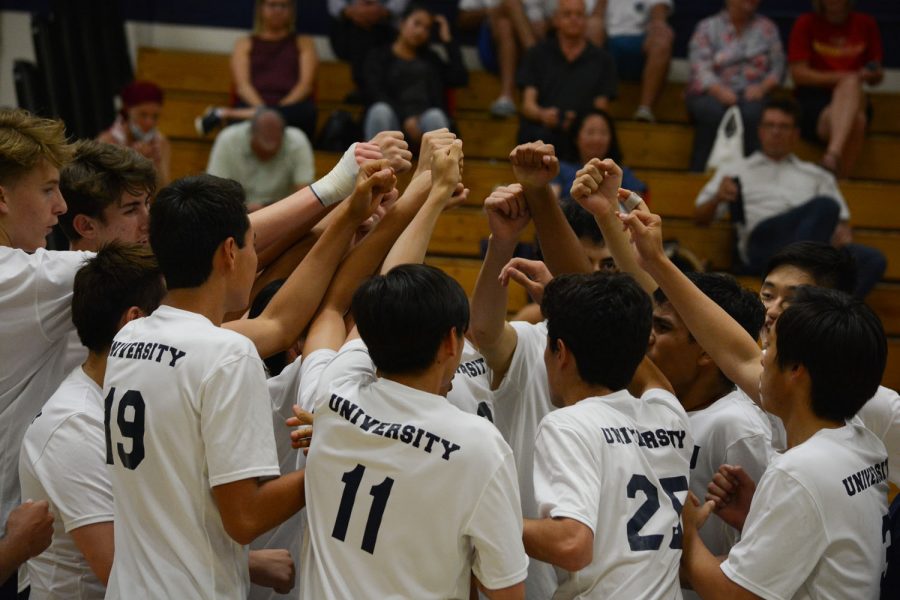 By RUTUJA SABNIS
Staff Writer
Boys Varsity Volleyball won against Woodbridge 3-1 and made CIF for the first time in more than a decade. What made the win even more special was that it was also the team’s senior night, commemorating all the senior boys who play volleyball.
In the first set, the Trojans were fairly ahead until the score became 18-8. At that instant, Woodbridge’s team gained momentum, but UHS prevailed, winning the first set 25-21. University boys ended up winning the second set fairly easily with a score 25-18.
The Warriors made a comeback in the third set and won 25-16. However, realizing that this game was the determinant in qualifying for CIF or not, the boys picked up their intensity and won the fourth set with a score of 25-19..
“My team played really great today and we just did really awesome offensively,” Team Captain Alhasan Hussein (Jr.) said. This win was especially self-gratifying for the boys because the first time UHS played against Woodbridge, UHS lost 3-1.
Making CIF is a big step in reversing UHS’s reputation for sports. Outside Hitter Gene Park (Jr.) said, “It’s like something we’ve been working hard for since the beginning of season and we’ve set this as our goal since the start knowing Uni hasn’t been a prestigious team in volleyball, so [making CIF] just feels amazing.”
Next week, on May 9, the team will be having a CIF-playoff match away against San Gabriel High School.