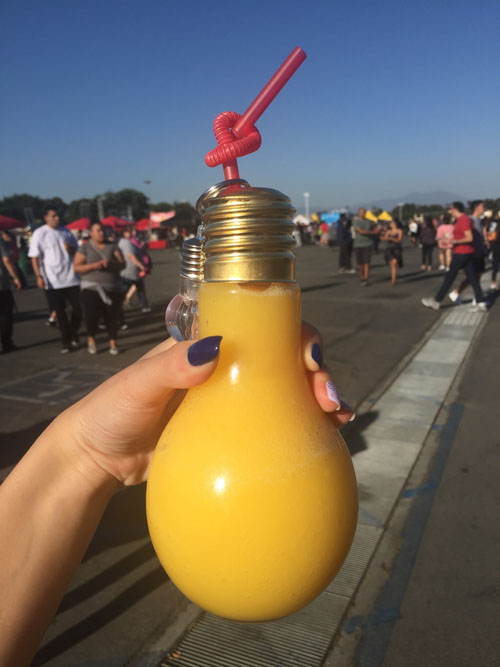 By VICKI LI
Staff Writer
After its beginning six years ago in Arcadia under the name 626 Night Market, 2017 is the fourth year that the organization has held an Orange County market so more people can enjoy a variety of food, performance and merchandise. Its first weekend took place from May 19 to May 21.
On Friday, May 19, my friend Lawrence Xu (Sr.) and I attended the OC Night Market for the $3 early admission price available from 4-6 pm. We arrived around 4:30 pm, relatively early for a “night” market, but two lines had already extended to the other side of the plaza. Luckily, the line was moving quickly and we got our tickets within five minutes.
Right after we passed through the gate, we entered a giant space dedicated to merchandise sales. We were amazed by the variety and quality of the merchandise offered, from caricature portraits to handcrafted keychains. Their prices tended to be on the expensive side.
Past the merchandise hangar, the fairground itself was divided into four rows. The two rows on either side were comprised of food vendors, while the middle rows featured food trucks and company booths for product advertisements. There was also an area where people could play games and win stuffed animals in between their food escapades.
The first foods we bought were squid legs and a mango smoothie, both from Squidies. The squid legs were $8, but they came in a large portion. They were crispy and tender, but the pieces were too big to eat in one bite. The smoothie was $7 and came in a light bulb-shaped bottle with an actual tiny light bulb hanging off of the straw. It was not overly sweet, and it balanced the squid legs’ saltiness out well. To our disappointment, it did not have a strong mango flavor. However, it came with $3 refills, so it was a pretty good deal, especially in the hot weather.
Next, we went to Seoul Street Food Co., a booth that sold Korean spicy rice cakes (tteokbokki), bibimbap and other Korean dishes. For $8, we ordered the cheese spicy rice cakes, which came in a bowl with plenty of soup and half an egg. To our surprise, they were not spicy upon first taste and sweeter than we anticipated. However, the spiciness kicked in when we were almost finished. The rice cakes were fresh and chewy.
Any night market would not be complete without boba. After the rice cake, we stopped by Urban Location Boba Tea House. We ordered the original boba milk tea for $6. It looked just like generic milk tea at first, but we were awed by its taste.
“This is what boba supposed to taste like. This is the OG!” Xu said. “This is what you would buy at a night market in Taiwan, where boba originated.” The drink had a perfect blend of sugar and tea, with plenty of freshly cooked boba at the bottom.
As we were looking for the next food booth to conquer, an unusually long line caught our attention. It was at Ice Cream Garden LA, which offered two of the arguably most Instagrammed and Snapchatted items in the entire night market: plant ice cream and rainbow grilled cheese. Plant ice cream is ice cream camouflaged to look like the soil of a plant. Flavors included graham cracker, Oreo cookie, strawberry shortbread and peanut butter cookie. We did not try it because the gigantic portion would have been too much for two people to finish. However, we did order the famous rainbow grilled cheese for $7. It was made just like regular grilled cheese, but with three different colors of cheese. The cheese was very stretchy but tasted just like regular cheese, despite the added colors.
There were also music and dance performances happening continuously on a stage at the other end of the fairground, where chairs were provided for people to rest.
We left with empty wallets and full stomachs, but we knew we would be back soon.
The next weekends of the Orange County Night Market will be on June 16-18 and August 25-27 at the OC Fair and Event Center in Costa Mesa. The 626 Night Market will be held from June 30-July 2, July 21-23, August 11-13 and September 1-3 at Santa Anita Park in Arcadia.