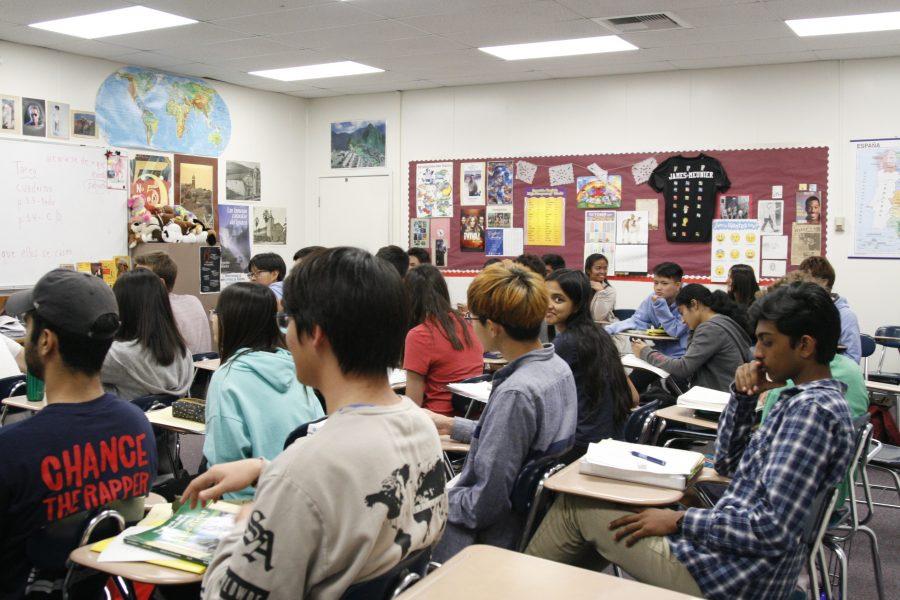 By SHEA RANGI
Staff Writer
The Irvine Unified School District (IUSD) has been working to reduce the number of students on campus for the past ten years.
The district has been rezoning the school boundaries and has added additional facilities to the campus in an attempt to decrease classroom sizes.
As of the beginning of the 2017-18 school year, there are 2573 students at UHS, which makes it the most populated high school campus in Irvine.
IUSD has been building more high schools in order to accommodate the growing number of students within the district.
Portola High School, IUSD’s fifth comprehensive high school, was opened at the beginning of the 2016-17 school year. It was built with the intention of spreading the population of current students across the district, as well as providing schools for the upcoming students in Irvine.
“Within the next five plus years the projection show Portola High School getting pretty big, which was the goal,” Dr. Kevin Astor (Admin.) said.
In the past there were 25 portable classrooms on the basketball courts near the football field. These portables were used for ten years until the Orange County Department of Education (OCDE) replaced the portables with the 900s and 1000s buildings in 2011, which are now  mainly used by the Deaf or Hard of Hearing (DHH) program. They currently hold 30 classrooms, two administrative offices and three rooms for special services such as Home Life and Therapy.
“For me it has been exciting to see a school grow so efficient,” Mr. Raul Manriquez (Classified) said. “I’m retiring next year, it’s been awesome, it’s fun working here, in order to work at a site like this you need to enjoy your work.”
The district has also re-zoned the boundaries of other Irvine schools in an attempt  to solve the problem of overpopulation on school grounds. This has occurred almost every time a new school was built or a new generation of eighth graders entered high school in IUSD.
The population at UHS has impacted the attention a student receives from their counselor. The American School Counselor Association (ASCA) states that the preferred ratio is 250 to 1; the current ratio of counselors to students at UHS is 450 to 1.
“With smaller caseloads we will be able to give more attention to students,” Ms. Hanna Addessi (Counseling Dept.) said. “[However,] within the two years that I have been here I feel that I have been able to develop a relationship with all my students.”
Some students prefer to have smaller classes so that they can receive more one-on-one attention from teachers.
“I feel that the size of Uni’s population allows for more diversity and interaction, but I would prefer smaller classes,” Sana Jayswal (So.) said.
Teachers also expressed a preference for minimizing the class size so that students would be able to gain more out of class.
“I would be able to give each of them more attention,” Mrs. Judy Richonne (Social Science Dept.) said. “I need to learn their names [and] I would actually be able to respond to their homework and grading. If I have two classes of 40 [students], that’s almost 80 papers.”
Despite the overpopulation of students on campus, some think that this adds to the school’s diversity.
“I think UHS is the most diverse high school I’ve ever been to,” Ms. Christen Fischer (Classified) said. “It’s like a big melting pot, from what I’ve seen everybody treats each other with respect.”