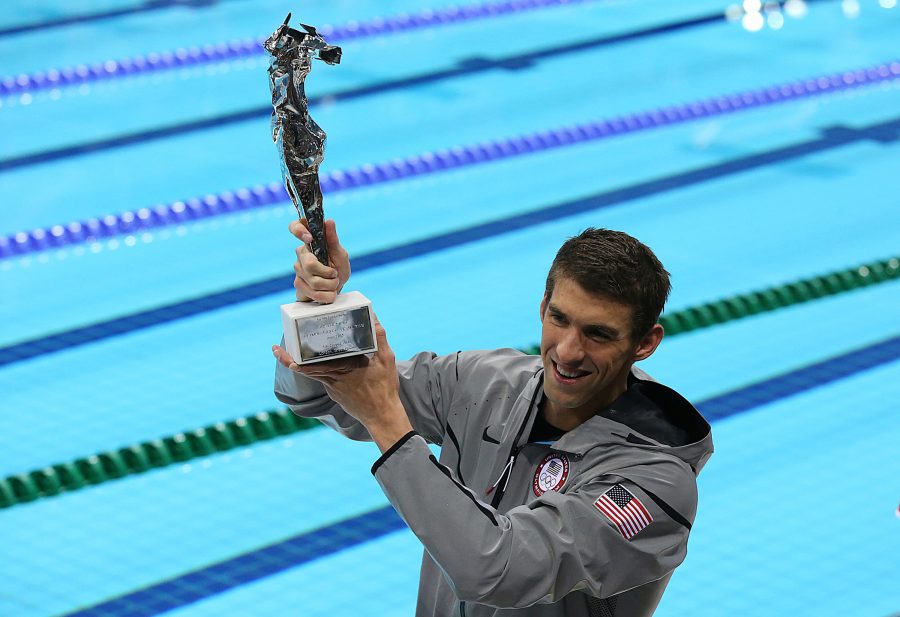 Michael Phelps shows off an award he received for becoming the most decorated Olympian in history. (Robert Gauthier/Los Angeles Times/MCT)


On November 14, Michael Phelps rejoined the U.S. drug testing program, a strong sign that he may be planning a comeback to competitive swimming.
After the 2012 London Olympics, Phelps retired from swimming and decided to focus on golf. Last December, he said to the Associated Press (AP), “Sure, I could come back in another four years. But why? I’ve done everything I wanted to do. There’s no point in coming back.”
Recently, however, Phelps told the AP in an exclusive telephone interview, “If I decide to keep going and swim again, then I’ll compete,” laughing, he added, “If I don’t, I guess I’ll just re-retire. Just don’t compare me to Brett Favre.”
The international governing body of swimming–Federation Internationale de Natation (FINA), known in English as the International Swimming Federation–requires athletes to be tested for 9 months before competing in sanctioned events. By beginning testing now, Phelps has a whole season to go before the 2015 World Championships in Russia, which is an important step to the Rio Olympics in 2016.
Phelps told the AP that “nothing is set in stone,” though he has enjoyed getting back in shape and is working out with his former team at the North Baltimore Aquatic Club.
Bob Bowman, Phelps’ former coach and close friend, said, “”I just think he’s in a place where he’s feeling good about swimming. If he chooses to compete, he’s got some time. I like having the ability to do it. To be perfectly honest, he’s not anywhere near being able to compete in a meet or anything like that. We’re just getting started on improving his fitness. We’ll see where that goes.”
In 2012, Phelps was adamant about retiring before he turned 30. He is best known for earning 8 gold medals in the 2008 Beijing Olympics and for being the most decorated athlete in Olympic history, with 22 medals total (18 of them gold). Even for people who only follow swimming during the Olympics, Phelps is one of the most respected athletes in the world.
“If I do really start getting excited and wanting to do it, I can make that choice [to come back to competition],” Phelps said. “If not, at least it’s something we can say we were prepared for. There are a lot of things that really excite me…that get me motivated. But I swam for 20 years. That’s something that’s going to be very, very hard to top.”
By ELYSIA OUYANG
Staff Writer
Delete Image
Align Left
Align Center
Align Right
Align Left
Align Center
Delete Heading