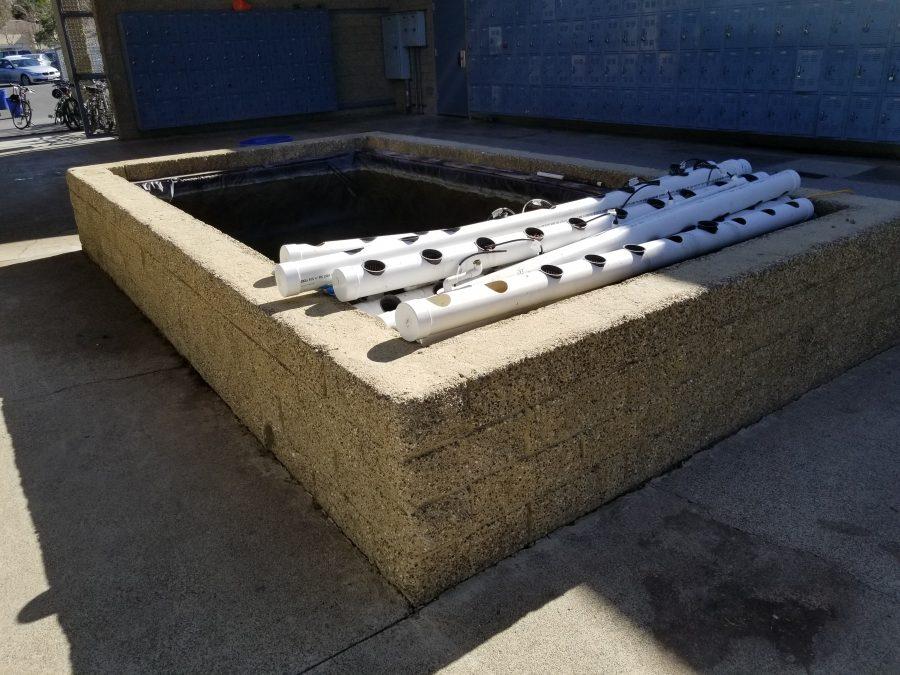 By FRANK CERVANTES
News Editor
After almost two years since its establishment, the Aquaponics Pond at the far end of the 300s quad now sits drained of all of its water amid the construction of surrounding classrooms.
The potential dust and debris from the construction threaten the carefully maintained balance of the ecosystem.
“The fish are with Groundskeeper Mr. Mike Gardner at his house and after construction is done, the pond will be brought back,” Renewable Project Management (RPM) Club President, junior Nadia Saadatmandi said. “The fish would have been in danger of eating the debris and the piping could have been clogged.”
The RPM club is responsible for the development and advancement of the pond which includes koi fish, goldfish, algae and edible plants.
“The [green] water is not a bad thing, it’s just what happens when there aren’t enough consumers of algae,” Saadatmandi said. “We had a good number of fish and I know Mr. Gardner added a turtle, but [the fish] can’t eat so much and we were planning on getting some new plants as well.”
The club had previously experimented with growing cucumber, lettuce and kale and attempted to raise tilapia, a commercial fish that could have been sold to local fish markets and restaurants to raise money for their project.
In the meantime the club plans to install solar panels and other upgrades to the pond for the benefit of the initiative.
“As of right now we have roughly or maybe more than three hundred dollars in the account,” Saadatmandi said. “It’s a modest amount, but it will go to new plants, solar panels and future projects.”
The club convenes Thursdays in room 311 at lunch and will decide on the aforementioned plans then.
Saadatmandi expects the pond to be refilled in approximately one to two months once the remodeling of the 300s building is finished.
The pond was first built in the second semester of the 2015-16 school year and was founded by former student Jack Ren.
“We spoke to the vice principals, the custodians, Mr. Gardener and [Math teacher] Ms. [Nicole] Bradshaw,” Saadatmandi said. “We had to send paperwork to the [Irvine Unified School] District (IUSD) to get the project approved.”
The project creates an artificial ecosystem where the algae feed the fish whose waste fertilizes the plants that filter the water.
“Last year before the summer we happened to get some really nice water plants and they kept the water clean,” Saadatmandi said. “But someone snuck in school and they overflooded the pond and all of our plants died.”
The fragility of the ecosystem is the main concern of the club; even well intentioned acts, like placing new water in the pond, may have detrimental effects.
“For fish the pH of the water is always a concern and if water is not gradually introduced the fish will die,” Saadatmandi said. “It’s why we switched to koi and goldfish; the other [fish] died too easily with our initial model.”
The club is optimistic about the continued development of the pond and encourages new members to participate in their future plans.
“Just one more thing,” Saadatmandi said. “Please don’t feed the fish.”
Delete Image
Align Left
Align Center
Align Right
Align Left
Align Center
Delete Heading