The Struggles of Growing Up in the “Mid90s”: a Movie Review 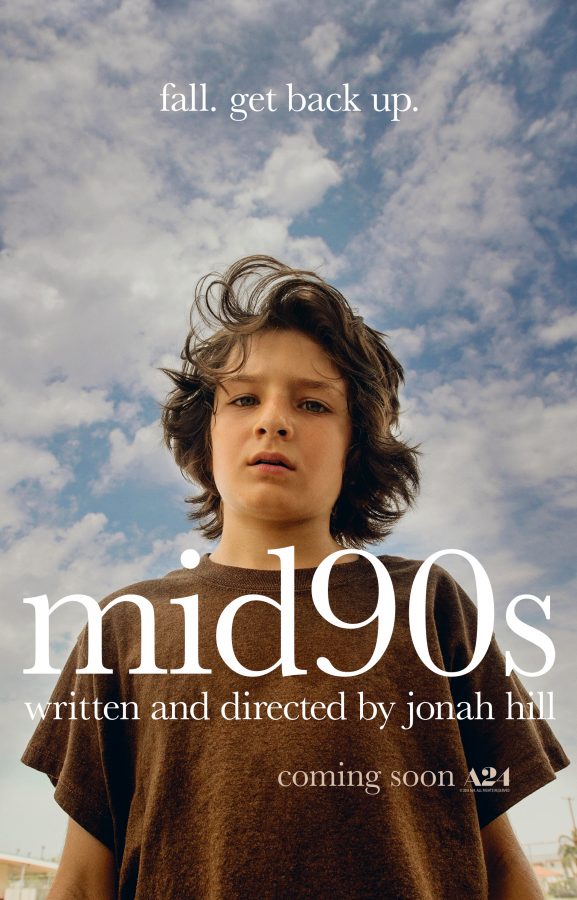 Taking place during the 1990s, Mid90s follows the story of 13-year-old Stevie living in Los Angeles with his single mother and secluded older brother. Like most 13-year-olds, Stevie is anxious to grow up. Not knowing where to start, he sneaks into his brother’s room one morning and scans his CDs, the posters lining his walls, his shoes, and of course, his skateboard. Later on, Stevie finds himself befriending a group of skateboarders. After his mother forbids him from hanging out with the group, the leader, Ray (Na-Kel Smith), invites Stevie to skate.
“A lot of the time, we think our lives are the worst. But if you looked into somebody else’s closet, you wouldn’t trade your s–,” Ray consoles, “so let’s go.” Ray’s invitation to Stevie ultimately opens the viewers’ eyes to the heart of skate culture: falling down and getting back up, the freedom of self expression, and above all, a sense of community.
Inspired by his own childhood experiences, first time writer-director Jonah Hill, who has acted in films including Superbad and The Wolf of Wall Street, tackles subjects such as the struggles of adolescence and finding oneself in his directorial debut. One can tell this is a very personal film for Hill, crafted carefully to satisfy his vision. The cinematography was shot on film to capture the grainy feel of the 90s. His cast of “non-actors”, real life skateboarders, delivers every line with honesty and poignancy, bringing the dialogue to life more dramatically than any actual actor could. The soundtrack and music, a combination of original score and 90s hip hop, makes the setting almost palpable. Every artistic choice in the film was made with affection and care, and Hill shares with the audience what growing up skateboarding meant to him and so many others.
As for the main character, played with heartbreaking earnestness by Sunny Suljic, a newcomer in Hollywood, Stevie is a person many can sympathize with. His struggle to adapt to the group’s slang, mannerisms, and habits are endearing and deeply honest. Even the way Suljic looks at the world around him adds to the performance and saddens audiences whenever Stevie fails. Other notable performances include those by Na-Kel Smith and Ryder Mclaughlin (Ray and Fourth Grade), who each put their heart and soul into their characters. Smith’s Ray is wise and sincere, voicing truths that drive many of the scenes in the film. Mclaughlin’s Fourth Grade, one of the side characters, quietly steals viewer’s hearts with his wide eyed stare. Both characters want to be more than mere skateboarders in the hood; Ray aspires to become famous, and Fourth Grade wants to become a filmmaker. One might see Jonah Hill’s aspirations reflected in both of these characters, their out of reach dreams and goals, aided by Mclaughlin and Smith’s performances.
In many ways, Mid90s is also a film about the outsiders as much as it is a coming of age story. Each character loves to skateboard, an art that takes time, patience, and determination to master. They are artists and dreamers, limited by their circumstances. The duality of these two conflicting forces is brought to the surface and beautifully exemplified by the community; every time they fall, they get right back up. In a tragic scene, Stevie skates over a roof opening and, knowing he would fall, does it anyway. This is the spirit of film and what rests at the heart of the story. One might even put it as La La Land with skateboards, a serenade to those who dream.
Although the story certainly comes from the heart, there are many flaws in terms of editing and pacing. There are scenes that drag too long and others that are too short. The conclusion of the film for example, is sudden, brief, and leaves the audience wanting more. It comes as no surprise that the film is a directorial debut, considering its messiness. However, despite these flaws, the film never strays from its point and main character. The story solely shares Stevie’s point of view and experience, and sticks close to its message. Despite all of its flaws, this is an admirable first attempt on Hill’s part, and he certainly has a bright future in directing.
An achievement on all fronts for this film is its honest and personal reflection of adolescents. Hill’s work spoke to many people, and one look at the audience serves as evidence. Very interesting people were in the seats for this film, many young men and women. Older men and women were in the audience as well, perhaps there to see if the film is loyal to their memories of the nineties, or simply there to remember it. Whatever the expectation, Mid90s is a film that speaks to many, young and old, and is a must watch for all teenagers. It provides a mirror for us to reflect and connect, even if we weren’t born in the Mid90s.