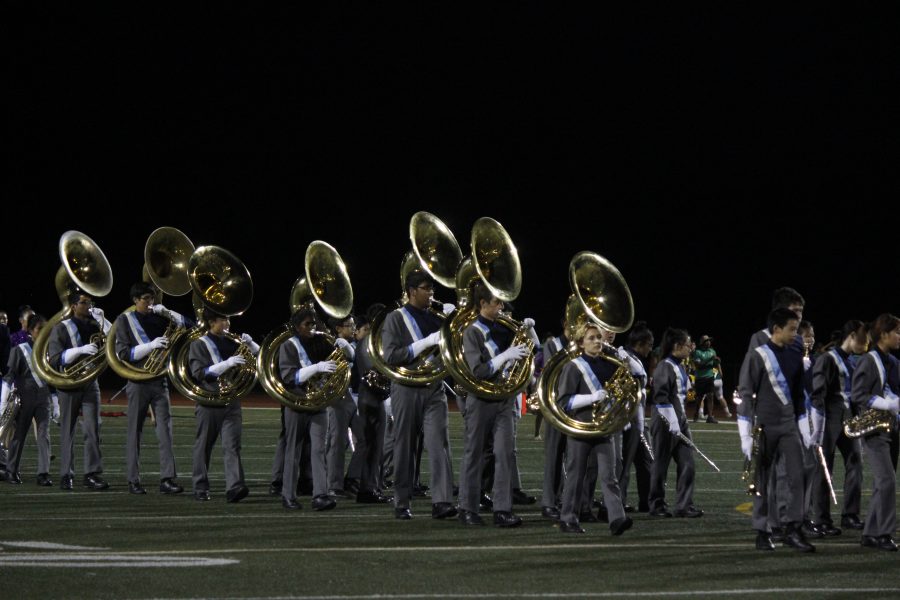 The Marching Trojan Regiment theme for 2019-2020 is “Expressions of the Heart”, explores fear, anger, sadness, and happiness, four emotions expressed in each movement. This year’s theme was not influenced by University High School’s 50 year anniversary but rather the purpose was to be entertaining and competitive as well.
This years theme is different from previous such that the theme is not pertaining to a specific person such as David Bowie. The theme this year was decided by a multitude of factors, including the appeal in marching band competitions.
“Every year we come with a theme and we try to cover a lot of bases.” band director Mr. Corey Heddon said. “We want to be entertaining for the crowd, but we are also judged and those judging events usually are a little more artistic and we have to cater to those things.”
Because the theme is somewhat abstract, the marching band will be adding new choreography and incorporating theatrical performances to get their message across to the audience and judges.
“There’s a variety of types or marching that we’re doing, and poses and all these other things, to more closely relate to each of the movements’ topics.” Heddon said. “There’s kids that are literally running… there’s kids that are acting out, trying, like as if someone’s looking over the shoulder. They’re literally acting on the field.”
Besides being entertaining and competitive, another goal of the theme this year is to send a little message.
“There’s a little message in there(Band performance) as well,” Heddon said. “The goal is that people learn how to deal with fear and anger and sadness and still somehow be happy.”
The goal of sending a positive message this year is in line with other band theme’s from previous years. “I think over the last couple years, we’ve sort of tried to have some sort of positive message that students can relate to as well.” Heddon explained.
In addition to the new choreography and theatrical performances, props were built in order to provide a visual representation of the emotions involved in the show.
“We’re going to try to communicate those expressions through props. So these props are going to consist of like colored fabrics, and like tarps and we’re going to use to help convey what we’re trying to express through the music” junior Praneet Iddamsetty said.
Iddamsetty also helped create some of the props that are essential to this year’s band performances for his Eagle Scout project.
“So essentially for my Eagle Scout project, I was reached out to by Mr. Heddon to make Multi Purpose prop platforms that we can use in our field shows to enhance the visual aspect of our field shows. So this year this will take the form of fabric that’ll be put up on a PVC frame that’s on top of the prop platform.”
These props are crucial to band’s theme and performance this year.
“Having props out on the field will boost our visual effect score and make the show cooler to watch in general, so I’m glad we are including them this season.” senior Katherine McPhie said.
Besides the theme itself, band this year is taking extra steps to be more competitive.
“The one thing I will say that’s different this year versus other years is that we’ve kind of gone through these extra steps to connect the visual representation, the body movement, and the kids dancing.” Heddon said.
With the inclusion of props and theatrical dancing in this year’s show, the Marching Band will have an original take on the “Expressions of the Heart.”