Club Kick-off: May the Best Club Win the Food Fight 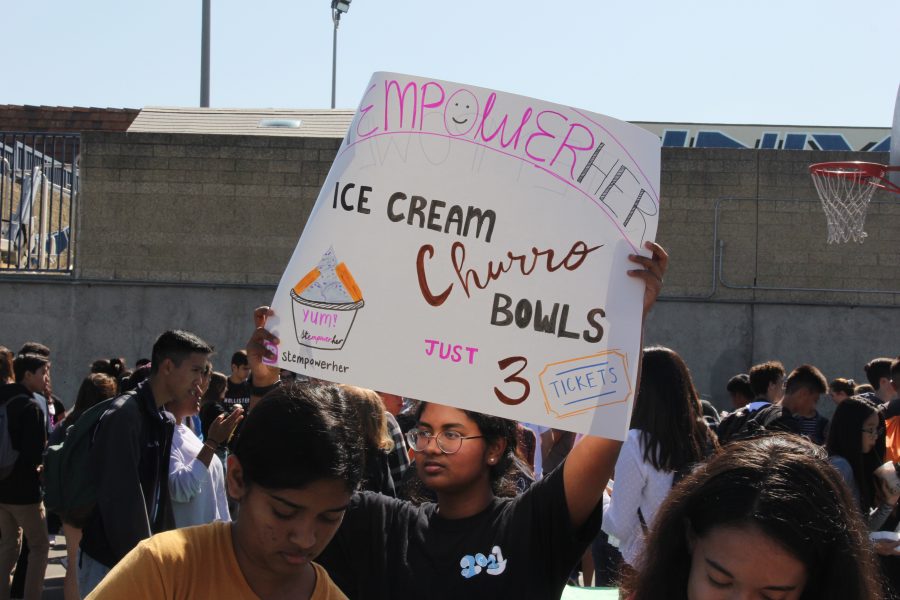 As sleep-deprived, moody high school students, we always find comfort in food. In any stressful situation, the clear solution is to eat our problems away. But of course, as much as we love food, we are also the pickiest – our highest standards are only met with Chik-fil-A, Cha for Tea, or In-N-Out. We would drive out to our beloved University Town Center just around the corner every lunch, but high school students are extremely lazy so we end up staying on campus. Though, there is a place that meets all of these demands: Club Kickoff. Club Kickoff (CKO), which happened October 18th this year, is a chance for students to browse the numerous clubs at Uni, sign up for a club, and donate to club fundraising. At least, that’s the idealistic definition of club kickoff. Realistically, it isn’t about the clubs; it’s about the food – students browsing the cheapest food options, signing up for a raffle to win a hydro flask, and donating their last ticket to a friend’s club. Even more so, club kickoff is a battlefield for both clubs and CKO-goers.
Before chaos erupts, there is almost a calming silence that comes with CKO set-up. Clubs leave their fourth period early to pick up food, prop-up tables, and tape up their posters. I made my way to the blacktop basketball courts with this select group of people, as I too was setting up for a club – we volunteered to be soldiers in the upcoming battle that is CKO. We were preparing in a somewhat nonchalant fashion, as if we were just waking up – needing a minute or two to adjust from the drowsy state brought on by class to the highly anticipated and exciting nature of CKO .
And then the bell – the battle horn – rang at 11:57 AM sharp. It was almost hypnotic. “By the sound of the bell, you will go into a frenzy.” Peaceful quiet soon became deafening shouts right and left.
“We have the cheapest boba! 3 tickets!”
“Wait don’t buy boba until you buy a metal straw from eco club!”
For some clubs, bombarding club-goers with flashy posters and screeching voices of advertisers completely worked.
“The most popular items were Eco club’s reusable utensils.” Clubs Commissioner Anthony Liang (Sr.) said.
Even though Eco club sold most of their items, they didn’t make much of a profit. Instead, they reached their ultimate goal.
“Whenever we do an event like Club Kickoff, our goal isn’t necessarily to make a profit. Our main focus is to spread awareness about being eco-friendly.” Eco Club publicist Sydney Field (Jr.) said. “We don’t need the money, so by making our items cheaper, there is an extra incentive to buy them to help the environment. ”
Of course, with war, there are losses along with gains. Students with a handful of tickets pity glanced past club booths with no customers, only to quickly avert their eyes to avoid eye contact with an eager club member trying to sell food they don’t want.
By the end of lunch, clubs that didn’t sell out became desperate for customers. They were now susceptible to bargaining – 2 for 1 ticket became a 5 for 2 ticket deal, which eventually became 7 for 2 tickets. Morale was shot down as clubs became tired of scouring for customers. Some students took advantage of this, using their last ticket to get the most food from clubs that at that point only wanted to get rid of their leftovers. Eventually, clubs sold out or gave away the last of their food.
At the end of the day, club kickoff was a success. The hype died down as the day went on, but CKO-goers left with bellies full and happy faces, while clubs cleaned-up and walked off with envelopes stuffed with club kickoff tickets.
“It ran smoother than expected – with fewer clubs than last year, clubs made huge amounts of profits.” Liang said. “Many clubs and non-club participants were extremely satisfied with the outcome.”