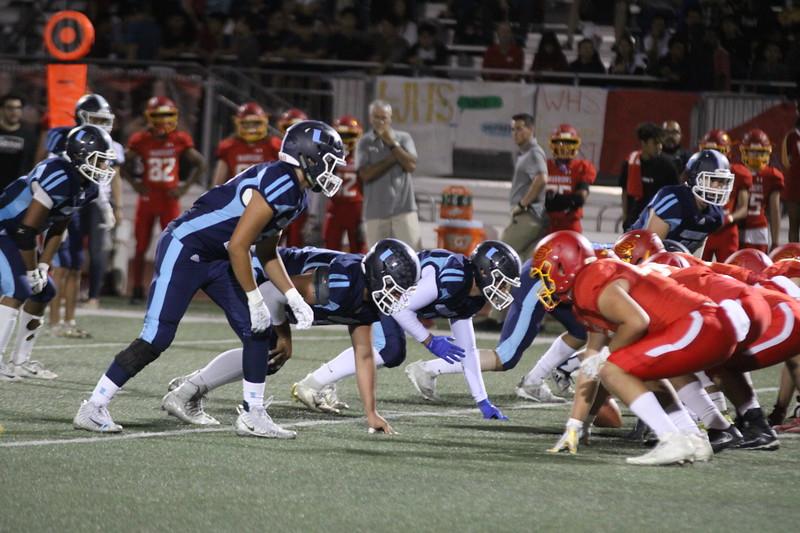 University High School played against Woodbridge High School, resulting in an unfortunate loss this past Friday, ending in score of 42-0. Despite this, UHS managed to persevere  with a strong offense and defense throughout the game.
“It was a hard game out there and the score was unfortunate,  but I feel me and [my] brothers did everything we could and I’m happy we gave it our all” said Senior Skyler Pouper.
Junior Damar Ward had two catches on the night to add up to 8 catches on the year for 170 yards. Sophomore Ziyad Merchant now has 699 yards on the year with 155 rushing yards. The offense, still striving for consistency, hopes to achieve their goal soon with a promising passing game emerging. Defense still remains dominant for UHS, with Senior Brian Choobin hauling in a whopping 70 tackles so far on the year.
The game was also highly anticipated by both students and staff as the annual rivalry game, in which the rivalry between the Trojans and the Woodbridge Warriors was put to the test. Before the start of the game, the Seniors on the team were honored with a rose and special recognition in honor of their last year playing for UHS.
“We balled out as hard as we could and we played the full 60 minutes. I’m disappointed with the result, but at least we gave it our all” said Choobin.
The Trojans are currently 0-9 this year, and have one final away game against Beckman High School on Friday, November 1st, at 7:00.