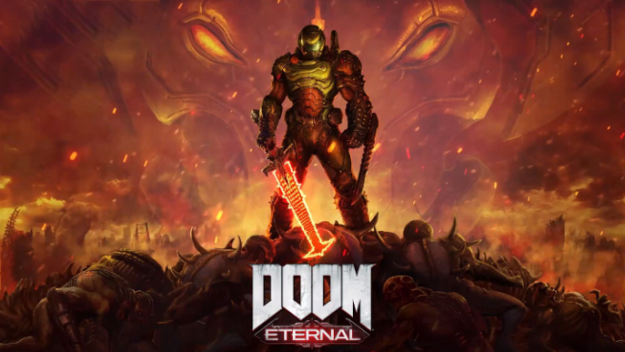 
By ADITYA TYAGI
Staff Writer
Doom Eternal is all about juggling ammunition and chainsaw fuel during a race from kill to kill. If that sounds exhilarating enough for you, go play it! If it sounds too violent for you, totally understandable – Doom Eternal is a one-way trip towards a heart attack.
Let’s slow down a little. Doom Eternal is about slightly more than I described above. You play as the Doom Slayer, a man with enhanced strength, a shotgun, and a heart full of pure rage, fighting against a massive demon invasion of Earth. The game itself is a first-person shooter, a genre that allows players to see demons rushing at them at every turn. No pressure.
The story is continued on from Doom (2016), in which demons came to our solar system through a portal on Mars, and has a larger part in the game overall. While this may sound like a benefit, it replaced the fascinating approach to narrative Doom (2016). In that game, exposition took a backseat as the Slayer refused to listen to whichever character spoke to him, and most of his emotions were instead conveyed through animations. For instance, a scientist reassured him that loss of life was necessary, but the Slayer would clench his fist at the sight of fellow humans being killed nonetheless. This approach is mostly gone, replaced by cut scenes and exposition the Slayer seems to suddenly care for. The cut scenes attempt to uncover the backstory behind the Slayer, but is it a character we need any sort of backstory for? He’s strong, silent, and hates demons. It should be as simple as that.
However, what Doom Eternal is really all about is its game-play, specifically, how it places the player in such an aggressive mindset to fit the Slayer. id Software, the developers of the game, followed a principle they call “push-forward combat”. In many modern first-person shooters, players play tactically, such as by aiming using a scope to have some semblance of accuracy and slowly regenerating their health when they are behind cover. Doom (2016) threw all that out the window, and Doom Eternal did the same. Players run amok through hordes of enemies, with no need to aim with a scope, incredible speed in all directions, and of course, the Glory Kill system. Glory Kills are powerful maneuvers that can  finish off damaged enemies, which rewards the player with health and ammunition. This system allows for players to engage in a race every time they come across an enemy. Run towards an enemy, dodge bullets while releasing your own, and finally be rewarded with a shower of life-saving resources. All these differences make for an experience in which players can truly be fast and aggressive while still able to be defeated by intense difficulty.
On the topic of difficulty, Doom Eternal really ramps things up from its predecessor. In Doom (2016), players could upgrade the Slayer’s ammo, health, and shield levels to a ridiculous amount. While more demons would spawn over time to counteract this system, players were simply too powerful for it to matter, resulting in an odd situation where the game became easier as it went on. Doom Eternal has similar upgrade systems, but ensures players cannot go as high as before. Limited health and shields, for instance, demand that the player maximize Glory Kills. But more importantly, limited ammo means the player constantly has to change up their play style, juggling the Slayer’s arsenal to face varying enemies. Think of it like chess (which is certainly how id Software does, describing the game as “combat chess”). Each demon moves and attacks in a unique way that forces the player to constantly re-adjust to new challenges.
On a technical side, Doom Eternal is an outlier in many massive, modern games – it’s amazing!. Performance on all platforms has been smooth with no lag and little glitches. From an artistic perspective, Doom Eternal has jaw-dropping environments, ranging from the sunken flaming pits of hell to the apocalyptic scenery of Earth. But Mick Gordon’s soundtrack is truly something to behold once again, as the pumping metal soundtrack keeps you going throughout the entire game.
Doom Eternal is easily a contender for one of the best games this year, and many now consider it one of the greatest shooters of all time. If you like shooting, tearing, or just having a blast, be sure to pick up a copy.
Delete Image
Align Left
Align Center
Align Right
Align Left
Align Center
Delete Heading