Behind the Scenes of a Political Campaign 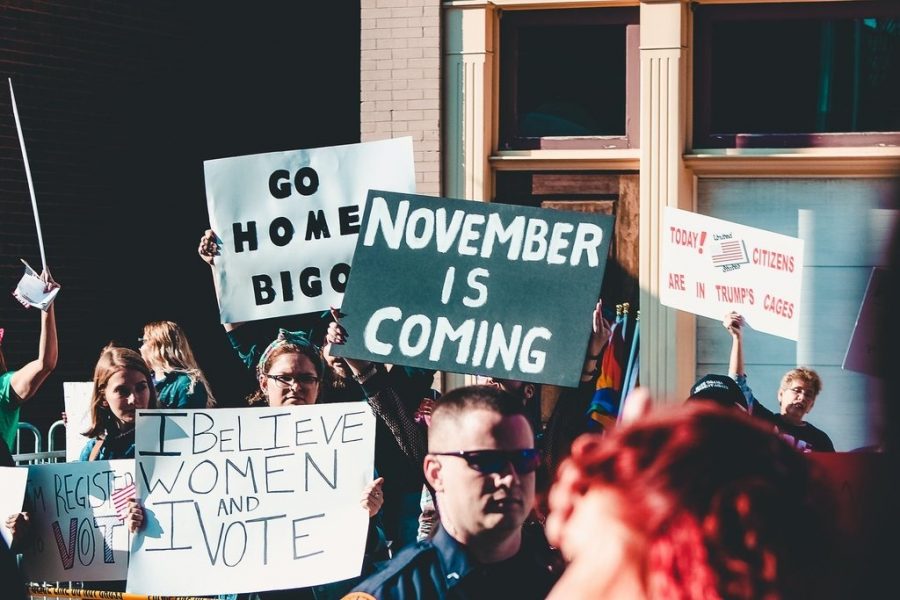 A political rally takes place and protesters are making their beliefs heard (Rosemary Ketchum from Pexels).

For years, political campaigns have been an important aspect of elections, lawmaking, and the proposal of new ideas. Not only are political campaigns vital to garnering support for a specific cause, but they also play a role in helping citizens vote for what they believe in.

As the voting period for the 2020 election continues, you may have seen advertisements for a particular candidate or state proposition. We can get a glimpse of what a candidate stands for through the political ads that run in between our favorite shows or YouTube videos. However, a thirty second advertisement does not convey the hours spent drafting the campaign and working behind the scenes to make these ads effective. Many people often forget that a political campaign team—much like any sports team—relies on the contribution of multiple people and departments to be successful. From volunteers to political consultants, each individual plays an important part in moving the campaign forward. Junior Daniel Kim, a UHS student who is involved in California State Assemblywoman Cottie Petrie-Norris’ campaign, described for us the intricate process of running a political campaign.

“Within a political campaign, there are so many people who must contribute to make a valiant effort towards reaching our goals,” Kim said. “Without the volunteers helping distribute yard signs or coordinating food drives for seniors, and the campaign managers helping organize events, we would not have made nearly the amount of progress that we have.”

As an intern, Kim is assigned a wide range of tasks to complete on any given day. Unlike other roles, interns have the opportunity to help in various aspects of the campaign and are not limited to a specific department.

“Every week, I help out with different tasks such as data entry, volunteer outreach, senior wellness check, participating in events, helping create graphics, preparing fundraisers, reaching out to low-propensity voters, helping get out the vote, and so much more,” Kim said. “Each week, I am assigned to do different things depending on what needs to be done.”

Kim enjoys the freedom of interning and said his campaign schedule usually consists of “workshifts and webinars during weekday afternoons [and] phone banking on weekends.” Phone banking usually entails hours of calling potential voters and reaching out to supporters for donations.

While assisting a campaign can be time consuming, there are many advantages to being at the heart of a political cause. For instance, working behind a political team offers hands-on experience, a way to establish relationships with others who share a common interest, and an outlet to bring positive change to the community.

“My favorite part of supporting a political campaign is being able to make an impact on my community,” Kim said. “As a high school student, I knew that helping out in a local campaign was a strong start in getting involved [and] I also admired our assemblywoman’s dedication to making our community a better place.”

Kim noted that interning is not only a great opportunity to practice finding a balance between school and extracurricular activities, but it is also a chance to be involved in issues that are very relevant to today’s society. Cottie Petrie-Norris, a Democratic member of the California State Assembly, is currently running for re-election to represent the 74th Assembly District. Among other causes, she hopes to resolve issues in the student loan industry, reduce domestic violence, and secure state funding for homelessness in Orange County. While these are reasonable goals, achieving them is made possible only by the team backing her campaign and raising awareness for these issues.

“A big accomplishment that interns, volunteers and all people of the campaign collectively helped achieve was checking in with and offering help to over 60,000 residents during the COVID-19 pandemic,” Kim said.

This is just one example of what candidates are doing to establish a good rapport with potential voters. As the election continues, it is important to note that political campaigning is still a competition among candidates to represent their district and its needs. With the political climate today, we must consider what the individual candidates can do for their district.

“I hope my work will help bring positive change towards our district by efficiently addressing issues of climate change and societal oppression,” Kim said. “The primary focus of this campaign is to get Cottie re-elected because with the state our country is in today, we are in desperate need of change. Keeping Cottie in office will also ensure that she will continue delivering for our district.”