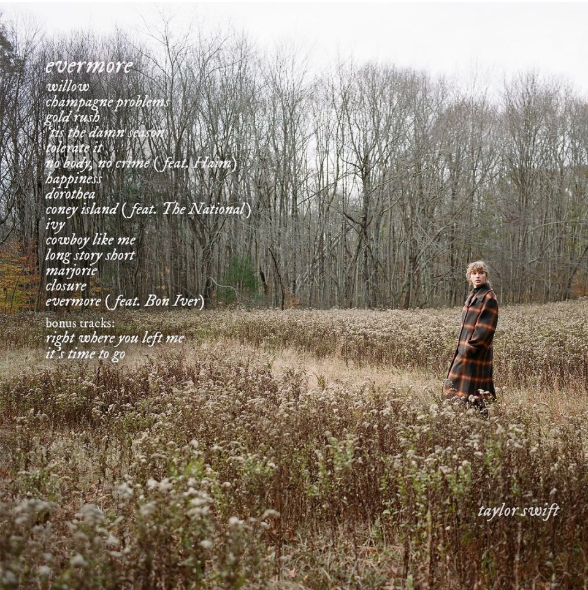 Taylor Swift’s newest album evermore has gained widespread praise as her versatility has proven itself yet again (Beth Garrabrant).

The album evermore swells with maturity as Taylor Swift strings together lyrics and chords as if they were beads on a long bohemian necklace. She’s reflective of her past in a longing and folky sort of way.

A favorite track on the album is found in the holiday inspired lament, “‘tis the damn season.” The song centers around returning home to the people and emotions she has left behind. It’s haunting in its subtlety and is reminiscent of a toned down ‘90s rock ballad. Through her lyrics, she creates an emotional pull: “The holidays linger like bad perfume, you can run, but only so far.”

I’m not usually a fan of country music, but the track “no body no crime” challenges my understanding of its definition. The lyricism, the accusatory tone, this song is brilliantly chilling. “willow” is so hauntingly beautiful. The music video is stunning. Taylor wanders through a fantastical wood as the angelic fairy being that she is.

My personal favorite, “champagne problems,” narrates a broken love story between college sweethearts. A guy who wants more and a girl who wants it to end. He plans to propose and the girl rejects him. The song details the struggles of the protagonist and the denial of her fiancé. Throughout the song, there are numerous allusions to mental health. Swift sings, “She would have made such a lovely bride, what a shame she’s f***ed in the head.” The sorrow she captures in its simple melody is ridiculously impressive, and the care she applies to telling the story of a woman that is speculated about is reflective of her personal experience.

The variety of the appeal on the album is really what makes it remarkable. Gathered from interviews with “Swifties,” or fans of Taylor Swift, the favorite track on the album seems to be “gold rush.”

Senior and Taylor Swift fanatic Taylor Singh said, “[her favorite song is] ‘gold rush’ because it’s the metaphor of how she doesn’t want to be with someone that everyone else wants. Because it feels like a ‘gold rush’ and everyone wants to have it.”

Junior Saloni Sharma agrees but for another reason.

“If I’m going to be 100% honest with you, it [‘gold rush’] stuck with me because it’s the least country song on the track in my opinion – not that I hate country Taylor Swift, but I prefer her faster paced music,” Sharma said.

I’ve been a lowkey Taylor Swift fan since her early releases. I can sing and quote all of her Red album. My mom and I listen to “1989” every Saturday while cleaning the house. evermore stands out to me because it speaks to her journey as an artist. She’s capable of producing art in multiple genres, and she proves over and over again that nobody can do it better than her.

Swift in the past has voiced her mental health struggles and how being in the mainstream media has taken a toll on her. Due to stay-at-home orders and COVID-19 restrictions, Swift has been able to focus on herself and what she searches for in her music. evermore seems to reflect Taylor’s true soul. Her music has evolved; in the past, she has successfully attempted a variety of styles, but evermore sits on the top of my list. The thing that amazes me about her most as an artist is that she has never failed to deliver. She will never be considered a one hit wonder; she is a generation-definer, a chart-topper and a fan favorite. Swift is a businesswoman, a talented artist, and a strong human. She delicately paints emotive stories in evermore through her wispy tone and folk-focused pieces, yet she evokes those same emotions in other ways through her other albums.