Trouble in the North Korean bubble 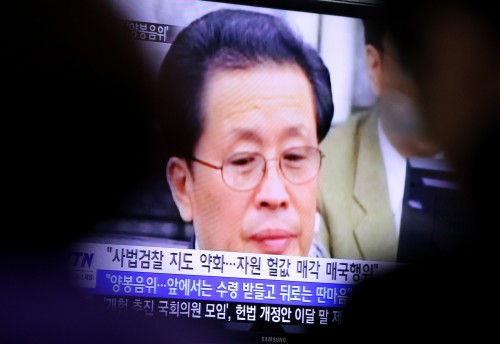 On December 13, North Korean leader Kim Jong Un ordered the execution of his uncle, Jang Song-Thaek. Before his death, Jang was the second in command and held considerable power in the North Korean government as the Chief of the Central Administrative Department of the Workers’ Party of Korea (Reuters).
Many people were surprised at Jang’s downfall of power. When Kim Jong Il passed away two years ago, Jang gained the trust of Kim Jong Un and helped him succeed his father, Kim Jong Il, as the next Dear Leader. The uncle-nephew relationship soured over the past two years, however. According to Nicholas Eberstadt, a senior adviser to the National Bureau of Asian Research, Jang was denounced for “anti-party” activities days before his execution and was stripped of all his positions in the Politburo, the leading government body, and his membership in the Workers’ Party of Korea, the sole party in North Korea. Democratic People’s Republic of Korea (DPRK) state media reported that Jang, a “traitor for all ages,” confessed to plotting a coup against the Dear Leader and “schem[ing] to drive the economy of the country and people’s living into an uncontrollable catastrophe” (North Korea Leadership Watch).
Many countries are concerned with the potential consequences of Jang’s execution. China, North Korea’s only major ally, is particularly worried that North Korea will become even more tumultuous than before. According to The Diplomat, Chinese military forces held training exercises following the execution and have increased security at the North Korea-China border because many refugees may attempt to enter China to avoid turmoil in North Korea. More importantly, China has legitimate concerns that North Korea will become economically unstable. Kim has differing economic policies from Jang, who was the primary force behind “special economic zones” along the border and other economic reforms with China, and does not intend to modernize North Korea. Some analysts claim that an economic crisis in North Korea may be imminent because North Korea has begun exporting gold to China, and North Korea would only sell gold if it is desperate for money (Korea Times).
Before his death, Jang was seen as a reformer who could guide his nephew and North Korea on the right path. The execution gives Kim sole control of the North Korean government, and many believe that North Korea will continue to be hostile and unstable. According to the European Council on Foreign Relations, China used to consider North Korea as a communist buffer state against South Korea and other pro-American countries nearby, but concerns over nuclear weapons and North Korean hostility toward China have changed relations between the two countries. Because many countries, such as the United States and China want stability, North Korea will become even more isolated from other countries who disapprove of its aggressiveness.
Although the Dear Leader has total control of the government, he has a difficult task of improving the country’s miserable economy and international affairs. Even more difficult for Kim is demonstrating that ordering the execution of an uncle, an unimaginable act for most people, was necessary to improve the country. Kim’s actions in the future will determine whether Jang’s death is a turning point in North Korea or just another purge.
Written by ANDREW HONG
Staff Writer