UHS presents: “The Phantom Tollbooth” with a Q & A session with Mallika Cadin 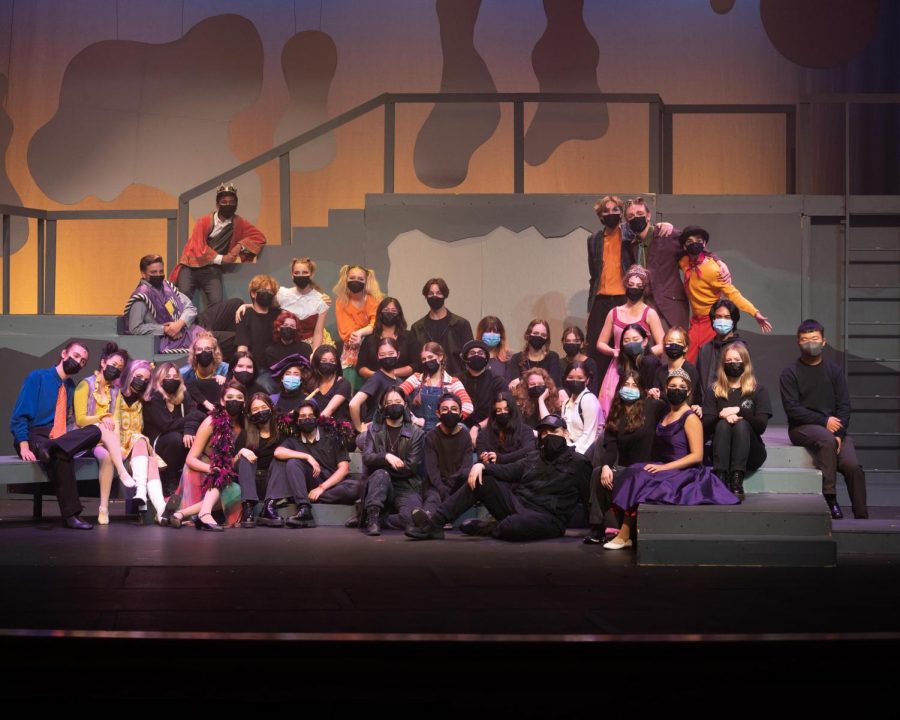 UHS’ spectacular Fall play, “The Phantom Tollbooth” played in the Big Theater between November 18th and 20th. “The Phantom Tollbooth” was an insightful look into education and boredom in a nontraditional way. The play featured a young girl named Mila, junior Mallika Cadin, who finds herself exploring a world she never even knew existed. This world is referred to as The Land of Wisdom, a kingdom Mila learns about when a strange package unexpectedly appears in her room at a time when she finds no meaning in her routine life.

Along the way, Mila is met with many obstacles, but she is also seen finding guidance and friendships to help her on her explorations of this new world. One character she meets is a watchdog named Tock, senior Kaylie Kubota. Tock decides that he will assist Mila out of the Doldrums and on her way to Dictionopolis, a magical land of words. Soon after they arrive, Mila and Tock are informed that there is a division in the kingdom between the Mathemagician, junior Natalia Montaño, and King Azaz, sophomore Varin Gupta, both of whom rule part of the kingdom. This division occurs when the princesses, Rhyme and Reason, decide that both numbers and words are equally important and are subsequently banished to a castle in the air. King Azaz, swiftly after inviting Mila and Tock to a banquet, convinces them to go on a quest to find and bring back Rhyme and Reason. In order to achieve this, Mila and Tock must first receive the Mathemagicians’ consent, meaning that they must travel to Digitopolis. The king assigns the Humbug, senior Scott Burke, to serve as a guide in their quest to retrieve the princesses.

On their way to Digitopolis, the trio come across the Dodecahedron, junior Isabelle Gillies, who leads them in the right direction. Once they arrive in Digitopolis, they are greeted by the Mathmagician who then informs them that anything that King Azaz agrees with the Mathmagician disagrees with, regardless of what it is. The Mathemagician informs Mila that she and her friends may only proceed if she proves that they have agreed on anything since the princesses were banished. Mila then realizes that technically, the king and the Mathmagician have agreed to disagree, and the Mathemagician thus reluctantly gives his consent for the trio to continue their quest. Mila, Tock and the Humbug have one last obstacle: to get to the princesses in the sky.  They must survive the Mountains of Ignorance and defend themselves against demons that camouflage themselves as everyday people. Through their trials and tribulations, Mila, Tock and the Humbug are successful in defeating the demons and finally rescue Rhyme and Reason.

The following is a Q & A with the lead of the play, Mallika Cadin. Cadin also performed as Surabaya Santa in the Fall musical “Songs for a New World.”

Q: What was your favorite part about the play?

Q: How did your character contribute to the play?

A: My character helped bring out the purpose of the play. Mila, the character I played, followed the same path the audience took while watching the production, learning about the importance of words and numbers and why it is important to learn.

Q: What is something you appreciate about the play?

A: I really liked the message the play communicated with the audience. Through storytelling, the audience understands imagination and knowledge, as well as connecting with characters. I think the playwright, Susan Nanus, does really well creating a script with dialogue matching everyone’s characters as well as the storyline.

Q: What was the meaning of the play to you?

Q: What character did you relate to the most and if you could play a different character, who would it be?

A: I related to Mila the most. I never thought of learning to be important, but taking this journey showed me the true meaning of what education and friendship can bring you. If I could play any character I would choose the Humbug. They are so stuck up and egotistical, it’s humorous to watch. I think that character would be so fun to portray and act due to the number of choices you can choose from.