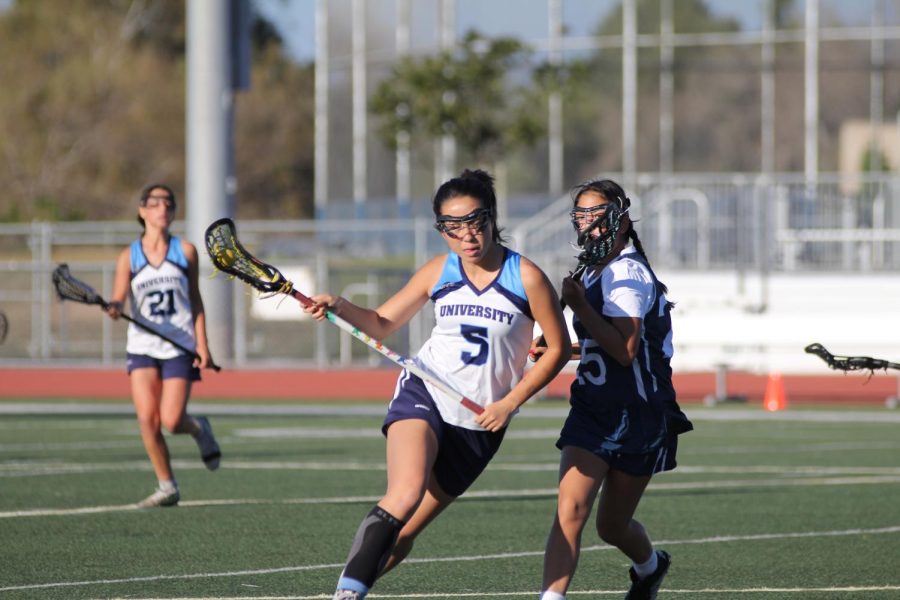 Senior captain Zoe Saito in the game against Northwood.

The UHS Girls Varsity Lacrosse team defeated Northwood High on March 9th with a final score of 7-6. The win boosted the team’s standing to a record of 8-3.

When the team last faced Northwood on May 19, 2021, the two teams battled till the last second, with UHS coming out victorious with a score of 16-15. Because of the tight game they last played against Northwood, the UHS team was extra cautious and nervous when their opponents.

“I think we always get caught a little off guard by Northwood, we weren’t sure what to expect going into the game, but once we started I think we were able to see their weaknesses and their strengths pretty quickly,” junior Elise Feuerborn said.

The score was virtually tied throughout the entirety of the game. However, it was not until the last second that senior Yade Cinar made the game-winning goal.

“My favorite moment was definitely Yade’s literal last second game winning goal,” senior Sophia Renger said. “The energy on the field and entire stadium was amazing because it prevented us from going into overtime.”

Coming off from the March 7th game against Beckman that went to overtime, UHS’ crucial win against Northwood allowed the five game winning streak of the team to continue.

“The team is getting so much better at moving the ball around and communicating,” Renger said. “But we could definitely improve on getting into the right headspace right on the draw at the beginning of the game.”

The team looks to continue their undefeated streak against Woodbridge High on March 21st and ultimately achieve their goal of becoming league champions for the third year in a row.

“I’m so happy that we won against Northwood, and Beckman before that, and hopefully we can continue to defend our undefeated streak from last year and our 2 year league champs streak,” Feuerborn said. “I just want to make the program proud.”