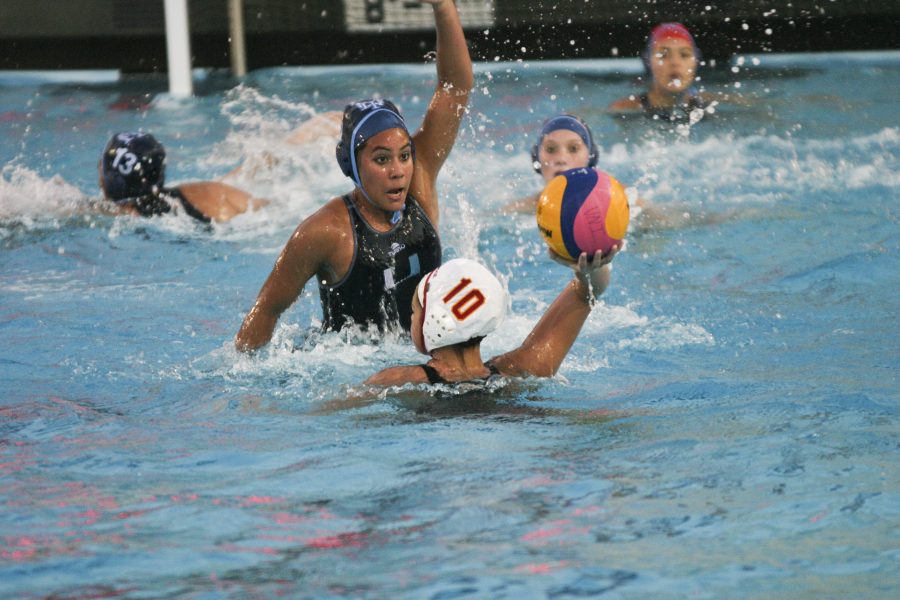 Girls water polo opened League with three loses to Woodbridge High School (WHS), Beckman High School (BHS) and Corona Del Mar High School (CDM). However, they placed second out of 22 teams at the Falcon Tournament.
On January 9, University High School (UHS) girls water polo played their first league game at home against WHS.  Although they lost 15 to 9, the team felt that they played well.
Co-captain Sara El Sherief (Sr.) said, “I definitely feel that we played our best out there. If we continue to play like we did today and keep improving, I feel we will have a high chance of beating Woodbridge next time we play them.”
After the first half, UHS was trailing behind by only one goal, with a score of 7-6. Yasmeen Sobaih (So.) said, “Madison Chen (Jr.) scored from half tank in the last few seconds. It was cool.” The team lost in the second half, scoring three goals to WHS’ eight. “We just got really tired,” said Sobaih, “WHS had more endurance. It would’ve been a closer game.”
El Sherief said, “Kyla Pickell (Jr.) really played like a team player and got everybody excited and set the tone for the rest of the team from the beginning.” Pickell scored 4 of UHS’ 9 goals. “I’d also like to recognize Aki Barber (Sr.) for playing her best as our goalie, even though she was sick,” said El Sherief. “I admire her ability to get in the pool and give it her all.”
Next, the team competed at the Falcon tournament from Monday, January 6 to Saturday, January 11 at Santa Ana Valley High School. The team placed second out of 22 teams after playing 5 games total at the tournament: two on Monday, one on Friday, and two on Saturday.
On the last day, they played in a round-robin to determine which team out of three would win the tournament. UHS played Segerstrom High School (SHS) and Marina High School (MHS), beating SHS (11-5) but losing to MHS (7-5), and took second overall.
“Second place out of 22 teams was amazing!” said El Sherief. “It was a week-long tournament and we really powered through it! The last game especially united us.”
On January 14, UHS’s girls water polo team played against BHS, losing 8-6. The game was tied at half with a score of 2-2, but BHS pulled ahead in the second half to win by two goals.
“We could have beaten Beckman but we lost our momentum in the second half,” said Sobaih “But I think we are definitely starting to come together and play as a team, not as individuals.”
UHS played against CDM on Thursday, January 16, losing 13-2. “They are the best team in league and I think we did okay against them,” said El Sherief. “CDM always has a strong water polo team. It was a great learning experience for all of us.”
The team currently has a record of 0-3 in league and total record of 7-9. They play their next game at Northwood High School on Tuesday, January 21.
Written by ELYSIA OUYANG
Staff Writer