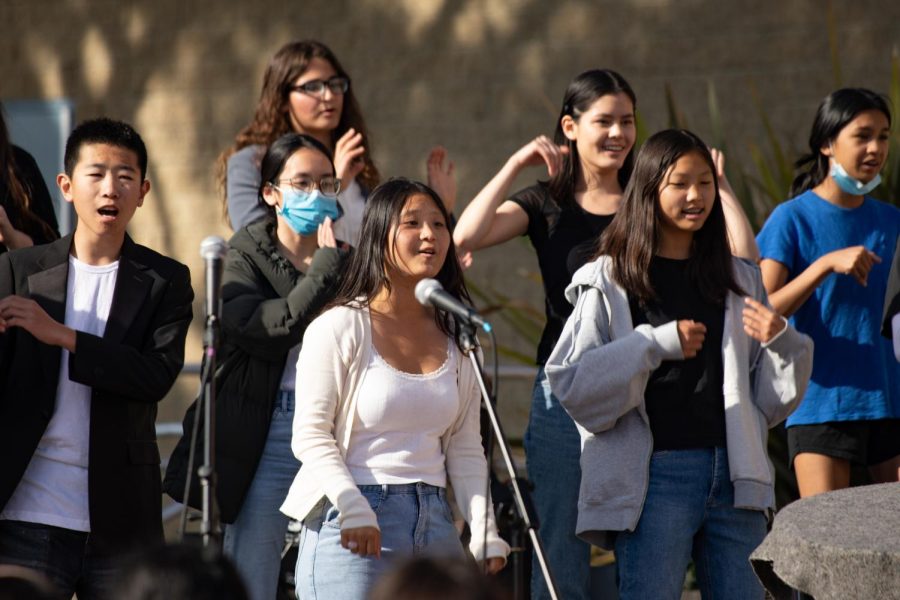 The UHS Choir department held its third annual Cabaret Night, its biggest fundraiser of the year, on April 27th outside next to the theater, serving coffee and desserts under the stars. This year’s Cabaret Night had the theme of “Decades” and had a total of 70 singers with 18 different songs ranging from the 1950s to the 2010s. These acts included a variety of groups and soloists alike, with participation from UHS’ acapella group The Undertones and UHS’ three main choirs of Canta Bella, University Choir and Madrigals.

Sophomore Claudia Kahana, a member of University Choir, discussed the message behind the event.

“Cabaret Night acts as a night where I can show people what we’ve learned and spend time with other people who love singing and admire their hard work,” Kahana said.

The singers made sure to demonstrate special attention to detail in tying the theme of Decades throughout the night.

“One of my favorite parts was the outfit changes to match each decade,” junior Caitlyn Liao said. “I thought it was a cute addition to each performance that really helped set the mood of each of our songs, and I also thought the song selection was nice across every decade.”

First year University Choir member junior Vibhas Ippili was a part of Bassboyz, which was the opening act of Cabaret Night and the first group in UHS Choir history to have done a medley for a choir performance.

“It was a compelling moment, I’m not going to lie,” Ippili said. “We were really excited and nervous for our performance. There was pressure, yet we enjoyed what we did and we wanted to do this so overall the experience with the BassBoyz and this particular performance was exhilarating.”

“I loved the outdoor concert and the students always impressed me with their talent in the department,” Blaney said. “I also love the amount of growth of singers from the beginning of the year.”

After the event, there was already eagerness to prepare for next year.

“In terms of next year, I hope that we will be able to bring back the aspects of Cabaret Night that we weren’t able to because of COVID constraints, namely having it indoors with the theater set up for it,” Liao said.