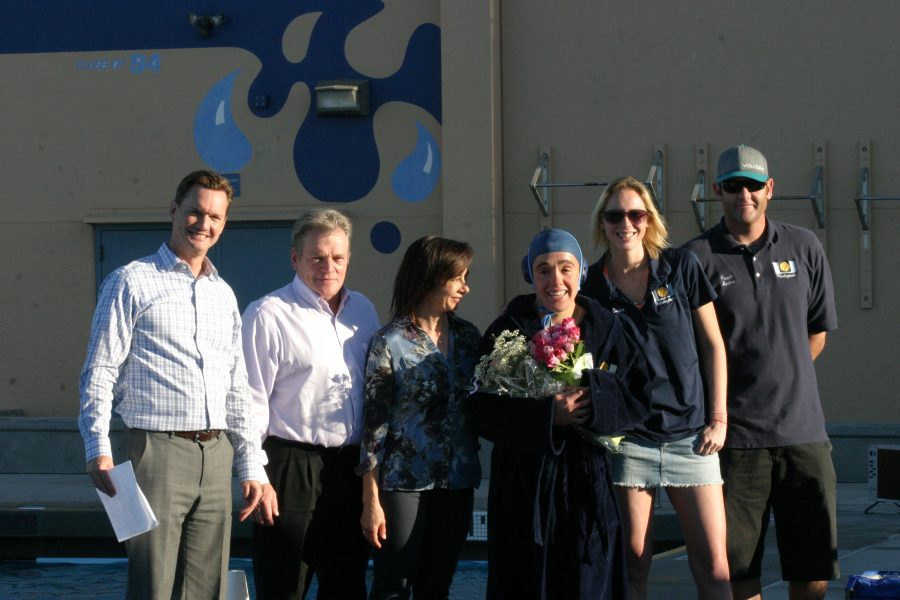 On February 13, the University High School (UHS) girls water polo team finished league at with a record 2-8 and finished its season with an overall record of 10-14. The team won against  Northwood High School and JSerra High School on February 11 and 12. On February 4, 5, and 13, the Trojans lost to Beckman High School, Corona del Mar High School (CDM), and Irvine High School respectively.
UHS won its  Game of the Week (GOW) on Tuesday 11-5 against Northwood. “We were pumped because we knew this was a team we could beat,” said Sara El Sherief (Sr.). “The top scorer for that game was Maddie Chen (Jr.) who was able to get the ball multiple times and get it in the goal. We had a lot of movement on offense and everybody was trying to get a chance to shoot. It was a great game to use as improvement for our skills. We played to win.”
Sophia Bajak (So.) said, “The GOW was fun and it was nice to have the support of some other students! We really improved throughout the season and all picked it up the last few games.”
On Wednesday, February 12, they won their non-league game against JSerra. They scored two goals in overtime to win 12-10. “Yesterday we went into overtime with JSerra and we got a great victory. After a tough season, it was refreshing to push through these wins,” said El Sherief.
The team lost 7-4 against Beckman on February 4 and lost against CDM 5-19. “The last few weeks, we really just worked on better communication with one another. That was one of the harder things with our team, and once we were able to do this, our defense against teams like CDM really came in handy,” said El Sherief.
Their last game of the season was against Irvine. Although the team lost 9-6, the team still felt that they finished the season well. “It wasn’t an easy win for Irvine,” said Yasmeen Sobaih (So.). El Sherief added, “Last time we played Irvine, it was not one of our best games. Today we played them again and we could see that everyone truly gave it their all and we were right there next to them.”
Sobaih said, “I think we played really well this year and are coming together as a team. All the girls are really great and I’m looking forward to next year to play with them again!”
“As a senior it’s so crazy to look back on all the practices, games, team dinners, and memories,” said El Sherief. “I was fortunate to have such a great team to experience all of it with. I just feel really accomplished and it was really emotional today for me knowing I won’t be practicing water polo in the Uni pool ever again.”
By ELYSIA OUYANG
Staff Writer