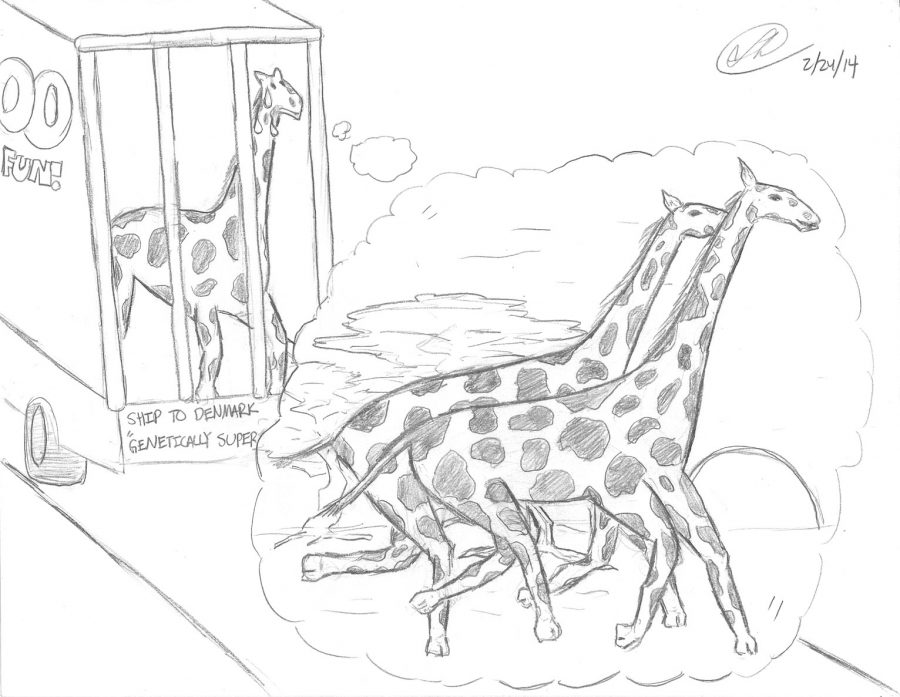 
The Copenhagen Zoo: quiet, then the sound of a bolt gun. Worried that a 2-year-old giraffe would inbreed, the zoo killed it to make space for more “genetically useful animals”. In fact, this young giraffe was so utterly useless that the Copenhagen Zoo was unwilling to give the giraffe to either of the two zoos volunteering to take it. Instead, they felt it was best to rid the world of that worthless creature by publicly feeding its meat to the zoo’s lions.
I cannot deny that zoos are great fun. For hundreds of years they have provided entertainment and education to people of all ages. Many zoos also save wild animals from poachers and heal sick and injured animals. However, we shouldn’t be putting wild animals in captivity in the first place. Animals participate in complex social interactions and thrive in diverse ecosystems that a man-made structure could hardly simulate realistically.
The existence of zoos is so pervasive, that to overthrow the zoo industry would be to destroy an international pastime. But when zoos breach the unspoken contract to respect captured animals and their offspring, the education and entertainment provided by zoos is no longer justified. Granted, if that giraffe were in the wild, it could have been killed by a predator anyway, but here is the difference: if that giraffe were in the wild, it would have the chance to run or fight. In the zoo, death is a sentence.
As long as humans keep wild animals in captivity, they have a responsibility to respect these animals. People have made a distinction between themselves and the rest of Earth’s inhabitants, a distinction that occasionally leads to the assumption that our intelligence raises us to a level of superiority that justifies practical cruelty. But because we have intelligence, we have responsibility. Whether or not animals are treated with respect is not up to them; they are not the ones responsible for passing a threshold of moral understanding.
True, another animal would have died in place of the young giraffe; the lions have to eat something. But by removing an animal from its natural habitat, zoos are bound by an unspoken contract to keep that animal happy and alive for as long as possible. With the aim of zoos to foster respect for nature, what message does it send to kill a young animal just because it did not serve a useful purpose to the zoo? I was not aware animals only existed to be useful to humans.
Written by BIYONKA LIANG
Staff Writer
Delete Image
Align Left
Align Center
Align Right
Align Left
Align Center
Delete Heading