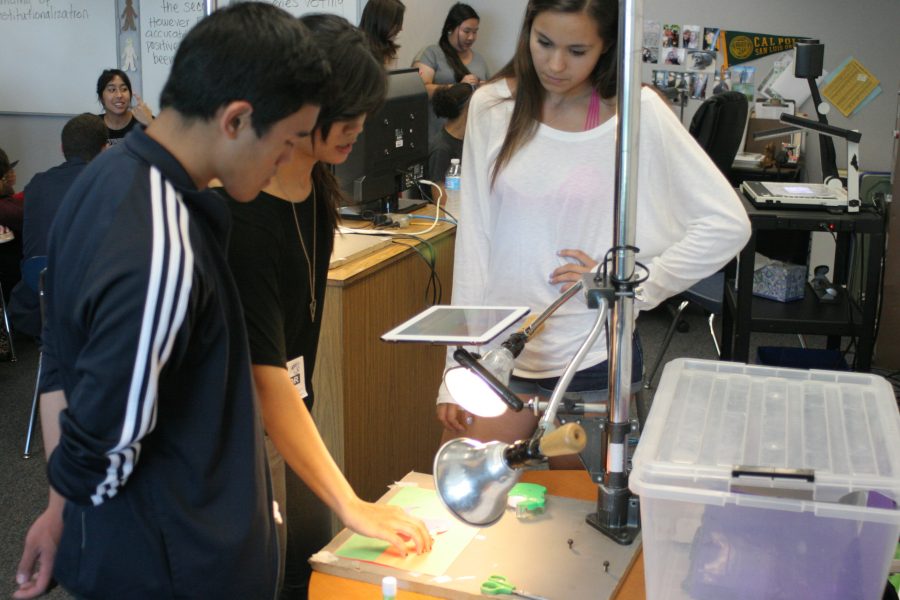 From April 20 to 25, students in Irvine Unified School District (IUSD) high school health classes worked with two animators to create drug education and prevention public service announcements (PSAs). Leilani Smith and Sarah LaBracque, animators from the animation and film Royer Studios, introduced Ms. Christine King’s (English Dept.) third and fourth period health classes to drug education concepts and have assisted students in creating group PSAs.
Ms. King’s health classes have learned about drug education and drug prevention topics for the past month. Ms. King expanded the tobacco lesson within the drug education and prevention curriculum to address increasing concerns of nationwide health educators regarding the rising popularity of e-cigarettes and their controversial nicotine composition. Tying the PSA project into her expanded curriculum, Ms. King began the week by having students form groups of 5 to 9 to create PSAs. Reflecting on her class’s experience assembling PSAs, Mrs. King said, “The students wrote their limericks, created their artwork, pieced their storyboards together and recorded the voice-overs.” Beylul Ephrem (Sr.) and her group wrote a limerick “Red Noodle Red Noodle” for their tobacco free PSA. Ephrem said, “Having an animator here is a great experience. I learned lots of shortcuts to the animation process. I liked learning from a professional and it was really nice that we got to see the first scene of our project played on screen.”
This is the first year IUSD has received a one-time funding from Tobacco Grant. Because the funding for this project was rare, this is the only year that IUSD high school health classes will be given the opportunity to work with animators.
In past years, Ms. King has hesitated to assign the PSA project due to limited technological and classroom resources. However, with the additional funding from the Tobacco Grant and the assistance of two professional animators, Ms. King arranged the PSA project alongside the drug prevention curriculum. Ms. King said, “Having professional animators [in class] has brought a more mature aspect to the creation of a PSA.”
Smith and LaBracque helped Ms. King’s students create no-smoking messages informing the public that the popular e-cigarettes are not all free of nicotine. Students produced PSAs using short stop motion animation techniques. Using class iPads and construction paper cut-outs, the groups took series of pictures while moving the object and used an app to string the images into a slideshow.
Royer Studios will finish each of the students’ PSA projects by adding in background music and editing their work. The projects will be given back to the students on a disc for their own use. Ms. King and UHS staff are deciding whether the projects will be posted on the UHS website or featured on Univision.