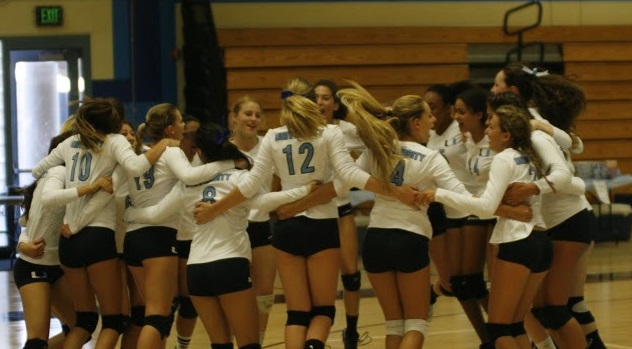 
On Tuesday, September 9, University (UHS) girls volleyball played Calvary Chapel High School in four games to secure a 3-1 victory by winning the first, second and fourth games.
Outside hitter Cali Fuller (Sr.), one of this year’s captains, sent bullet after bullet over the net while the Calvary girls were unable to get the ball back over. Fuller has been showing strong dedication and skill during the preseason. Fuller said, “My team is my motivation; I want to win for them.”
Libero Klaire Thoman (Fr.) was a key defender during the game. Thoman seemed to effortlessly pass balls to setter Madison Daniels (Jr.) throughout the game.

Christine Bennet (Sr.) said, “The game against Calvary tested the whole team, seeing who was going to step up to the next level to beat them.”
Last week the UHS volleyball team swept El Toro with a 3-0 win. According to Leila Heiba (Sr.), the momentum from the El Toro game carried over to the game against Calvary, securing the Trojans another win.
If the Trojans continue to play like this, they will most likely be seen at the California Interscholastic Finals (CIF). The team will play at the Dave Mohs tournament on Friday, September 12 and Saturday, September 13. The team’s next home game will be against Tesoro High School on September 18 at 5:15 PM.