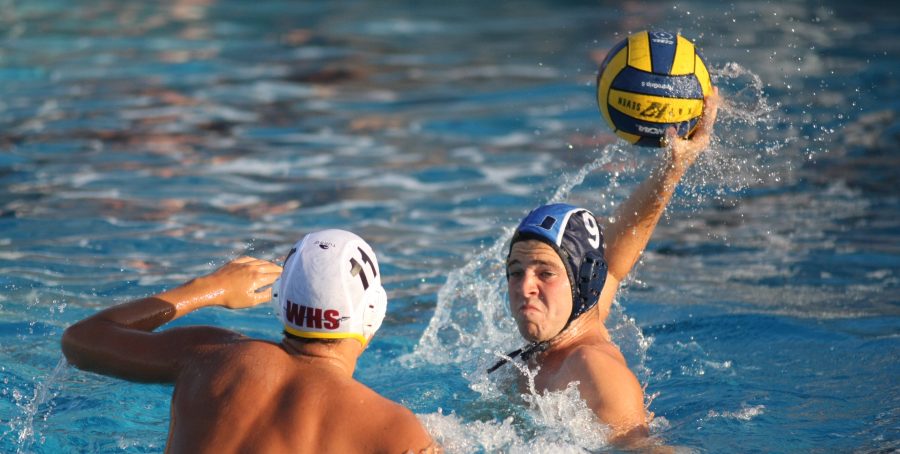 By COURTNEY WHYTE
Staff Writer
University High School (UHS) boys water polo played Woodbridge High School (WHS) for the second time in league on October 22. The teams were neck and neck the whole game, but ultimately UHS lost 4-6.  The Trojans played a strong defensive game, especially goal keeper Matt Moran (So.), who made various blocks throughout the entire game and had the crowd going wild with his aggression and motivation for his team.
In the first quarter, neither team scored. Both played defensively, maintaining a high level of intensity throughout the quarter. In the second quarter, Andy Rasla (Sr.) scored the first goal of the game. WHS shortly fired back with a goal of its own. Kian Matin (Sr.) responded with a strong shot from the outside. WHS scored once again and the first half ended with a score of 2-2.
In the second half, Nick Injev (Sr.) gave an assist to Daniel Campanaro (So.), bringing the score to 3-2 with UHS in the lead. Both teams were playing well defensively, and many fouls were called due to the tension between the two teams. WHS then scored two more goals. Oliver Ma (Sr.) put in a goal to the corner of the net and tied the game at 4-4. The third quarter ended with WHS scoring again, changing the score to 4-5 with WHS in the lead.
In the fourth quarter, goalkeeper Moran continued to keep the ball away from the net. WHS put one last goal in, ending the game with a final score of 4-6.
It was a disappointing loss for the team since it fought its hardest and played one of its best games yet this season. Rasla said, “It was one of our strongest defensive performances all season, we just need to be aware of getting countered when we’re all pushed up on offense. We’re working on it and a lot of credit goes to Matt for being such a wall back in the goal.”
As for the team’s future performance, Matin said, “Every game we progressively are getting better and working better as a team. It’s been frustrating for all of us because we are really working hard for that win and we know we are more than capable of doing it. Hopefully we get it in the next game against Beckman.”
The team’s next game will be away, against Beckman High School, on Thursday, October 23.