Renting out the Sistine Chapel is a win-win 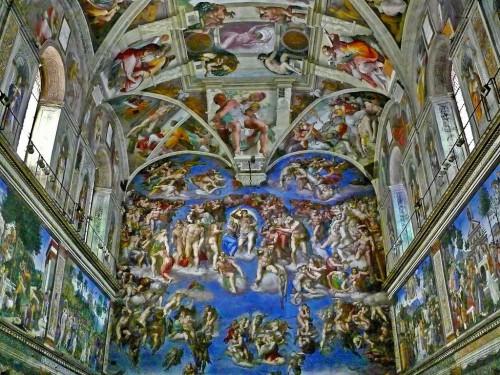 By TULSI BHATT
Staff Writer
Since his appointment as Pope, Pope Francis has been quite unorthodox, from downgrading the traditionally lavish life of a Pope to, more recently, agreeing with the idea of evolution.
In addition, Pope Francis did something that no other Pope has done before: he decided to rent out the Apostolic Palace of the Vatican, which includes the renowned Sistine Chapel. Porsche was given permission to rent out the Palace for a corporate event, in which all of its proceeds go to charity. The Vatican is not disclosing how much Porsche paid to rent the chapel. As part of the Pope’s “Art for Charity” project, Porsche enthusiasts were charged almost $6000 per person to tour the celebrated example of Renaissance Art. The chapel boasts almost 20,000 visitors per day, so the 500-year-old paintings embellishing the walls of the chapel have been damaged from the dust, sweat and breath of these visitors.
Some people have expressed their disdain for this private event. However, as someone who has visited the Sistine Chapel recently, I can report that there is little room for enjoyment when visiting. The room is both silent and packed, and visitors are constantly being moved out of the room, so the idea of a private event might not be as “detrimental” to the Michelangelos as people suspect. The event was part of Porsche’s tour of Rome, and the number of people who attended the event was significantly smaller than the number of people in the Chapel at any point during regular visitation times.  The Vatican rejects the idea that the Chapel was “rented” and instead describes it as “visible” for certain individual groups.
Personally, I do not understand the huge ruckus. Some have been accusing Pope Francis of making the Sistine Chapel into a money-making machine, but that claim is simply outrageous. Obviously, the preservation of décor is a high priority, as evidenced by Vatican art directors calling for zero growth on the six million visitors that visit every year, according to The Daily Beast.  At the same time, the Chapel is also used for its primary purpose: entertainment. And entertain it did, at a high price. But remember, the high price benefits the needy, so what really is the difference between 40 or so high-paying visitors or 20,000 typical tourists coming in per day? Because Porsche’s event helps the underserved and simultaneously preserves the Chapel’s art and architecture, the Vatican does not deserve such huge backlash from the public.
Delete Image
Align Left
Align Center
Align Right
Align Left
Align Center
Delete Heading