The Playground: a short story 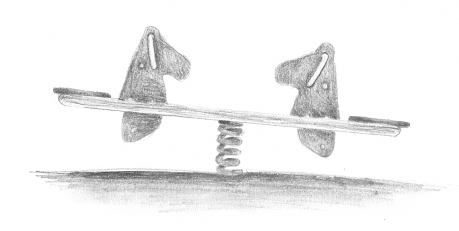 
It was chaos as usual in the playground. The children were running frantically in every direction. They were chasing each other, shouting poorly phrased insults, clinging to the mesh of the fence as if they were animals in a zoo. The school’s sole soccer field featured sidelines of splintered wood and rusted metal. The children gave it the nickname “The Cage.” Inside, ten games raged simultaneously, causing much confusion as several goalies dived for the same shot and players reeled into each other. The blare of various pitches of screaming, crying and laughter melded into one pulsing tune, which rolled into the ears of the teachers at a constant beat.
A small group of girls and I sat in the corner of the mess, eating our lunches with what we believed to be proper etiquette, especially compared to the dining habits of our barbaric peers. Across the basketball court sat a boy accompanied by his gang. They were all sitting on a concrete slope, and the boy sat higher than his companions, unconsciously conveying his power. The boy looked over at us, picked up a rock and launched it in our direction, as if the authority he had over his own friends were not enough.
It smashed into the asphalt about three feet away from us before clattering harmlessly away. We looked up in shock, wondering what had made the noise, just in time to see another tangerine-sized rock hurtle toward us.
We began to worry, asking each other what we could have done to upset the boy. We dodged the oncoming rocks as we waited for a teacher to intervene or for the boy to become bored. A rock occasionally pelted us, but we continued to sit calmly in our gathering.
Eventually, the boy became tired of his lack of accuracy and turned to a new plan of attack. He stood up, separating himself even further from his clan of laughing followers and began to charge. The boy sprinted toward us, holding a sandwich threateningly above his head. All my friends scattered except for me. I stood defiantly and turned to face the running boy. I was too proud to leave. I was not going to let him succeed in scaring us. I was not afraid of him, and I was not going to give him the satisfaction of watching me retreat. I did not even believe he was brave enough to follow through with his threat.
When the boy was only a few seconds away, I realized that I had misjudged. I turned around at the last moment, allowing my courage or pride to falter as I shielded myself from the blow. The sandwich thudded into my shoulder and slid down my back before falling innocently to the ground. I turned around once more and watched the boy gallop back to his friends, enjoying their trumpets of laughter and the glory of admiration.
I continued to stare as the boy returned to his throne. I was angry with myself for being foolish enough to believe he would back down. Even so, I wanted him to know that my mistake did not affect me, that the grease from the sandwich would wash out of my shirt and the bruises would fade from my arms. I wanted him to know that this defeat would not cause me to fret the possibility of others. I wanted him to know that I had the power to retaliate but was choosing not to. I wanted him to know I was better than the girl who would run, even if I could not be the girl who would fight. I did not actually believe all of the things I wanted him to know, but I needed him to believe them.
Delete Image
Align Left
Align Center
Align Right
Align Left
Align Center
Delete Heading