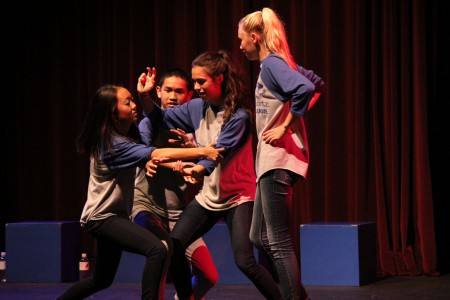 The blue team haggles over a trophy.

By JOE MOREIRA
Staff Writer
On Friday, December 4, the UHS Comedy Sportz team “delivered yet another amazing match,” according to co-captain Austin Barber (Jr.). This match against Tesoro High School was competitive, but the UHS teams achieved above and beyond, impressing the audience once again with spontaneous humor and taking home consecutive wins in their individual matches.
Though the UHS Comedy Sportz members won each match 50 to 35, Barber commended the Tesoro team for playing an outstanding match and proving themselves as worthy opponents. He said, “Tesoro played really well and are our honorable rivals.”
The night consisted of a variety of fun and light-hearted games, including Four Rooms, Stunt Doubles and Double Blind Freeze. The most memorable game was Four Rooms, in which two players start a scene and switch with another two players who start from the last words of the previous scene. Barber and Dylan Cecot (Jr.) especially impressed the audience with their performance in Stunt Doubles, making the audience laugh uncontrollably. Ultimately, each game pushed the players to their comical limits, putting the crowd on their feet for the majority of the night.
This match drew a larger audience to the big theater than other matches have, partly because the Tesoro team members had an unbelievable amount of support from their family and friends.
Comedy Sportz has proven itself a competitive and entertaining sport year after year, but this season has been one of the best I have witnessed. Many of the members have been on the team for multiple years and have greatly improved throughout the seasons. After watching this match, it is also evident that the captains have trained the new members well.
Though each member performed well against Tesoro, December 4’s match belonged to the Junior Varsity players. The amount of new people trying out for Comedy Sportz team has significantly increased, allowing the captains to choose exceptional members for the now well-rounded Junior Varsity Team.