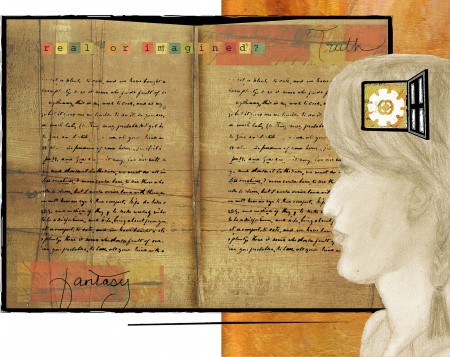 
It was another one of those days during which Lara sat at her desk, staring at the computer screen in front of her. Watching the blank page in front of her, she sighed, sinking back into self-pity. She had felt like this for months; Lara was unable to start her novel.
Last week, she had managed to type “The,” but then quickly changed it to “Once” and then “An” and so forth. She had absolutely no idea what to write about. Frustrated with her lack of creativity, she left her desk and slumped onto her bed. She closed her eyes and promptly fell asleep. A while later, she woke up. Her vision was cloudy, and she was still half-asleep. She felt like something was bothering her, but she could not tell what it was. She blinked, rubbed her eyes, and immediately widened them as she realized what seemed odd. She had woken up in a jungle.
Stunned and completely horrified, she got up from the dirt ground and frantically began to look around. It was some sort of mystical jungle, not like the ones she had seen on television. The area was entirely covered by enormous trees with reddish drooping leaves and blue tree-trunks. Exotic flowers with vibrant colors and swirly shapes lay in abundance. With no idea as to where she was or what was occurring, she began to jump around and yell for help. Her voice reached the tops of the tallest of trees but, there was no response. Desperate, she sat back down and hugged her knees. She closed her eyes and reassured herself with “It’s just a dream” on and on. After several moments of stillness, she finally opened her eyes. Yet, she had not left this strange place. She was completely alone.
Three hours slowly passed, and she had grown hungry. Her stomach was growling, her fear demolishing her sense of security. Finally, she got up and began to explore the area in hopes of finding some substantial food source. As she walked around, she grew amazed by what surrounded her. A transparent lake glistened with silver and rose-colored traces. Plants of all sizes with astonishing characteristics filled the soil. Strange creatures inhabited the area; she marveled at beautiful birds with multi-colored butterfly wings, yellow monkeys with orange dots and insects that shone with electric blue and golden tones. She had never seen anything like this, not even in the deepest depth of her imagination.
Suddenly, she noticed a bush with red berry-like fruits and burst with reassurance. She walked toward them, and just as she reached out her hand for one, opened her eyes. She had returned back to her apartment, lying on the bed she had fallen asleep on.
Astonished with what she had dreamed and unable to grasp the content of it, she returned to her desk to finish her work. There lay the greatest occurrence of all as she stared at the typed computer screen: a complete novel called “The Dream Jungle” and underneath it, “By Lara Vallone.”
Delete Image
Align Left
Align Center
Align Right
Align Left
Align Center
Delete Heading