Pre-1970’s Mercedes-Benz cars: worth the price 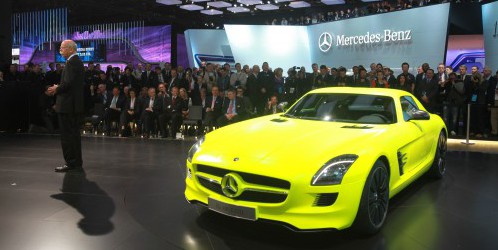 By TAYMOUR MOWAFAK
Staff Writer
According to the Mercedes-Benz website, Germany’s car icon, Mercedes-Benz, has been manufacturing cars in the automobile industry since 1926.  With the startup’s first success in the 1930’s at the Stuttgart Car Expo, it began to gain publicity, garnering the attention of several potential clients, one of them Adolf Hitler. The German forces became the first clients, inquiring after bulletproof cars. The sedan 770-model cars came shortly after, followed by the 300 SL. Following its early successes, Mercedes-Benz expanded its production line so that everyday consumers could purchase models within reasonable price ranges. Those models included the famous 190 SL, 280 SE, 220 D and 280 SL, which were later phased out to make room for newer models.  With an increase in newer models, the prices for pre-1970s Mercedes-Benz cars have increased. However, the question for most classic Mercedes-Benz car owners is: what caused this rapid rise in prices, and why do people still desire to buy these cars?
The demand for classic cars has rapidly risen over the last twelve years. In the fifties, only 3,500 units of the 300 SL were manufactured, but as they grew older, they also become rarer. Only about half of the cars still exist today, with many of them residing in car museums. The production of these classic cars has been discontinued, meaning that as time goes on, the value of these cars increases.   Yet, even as the prices increase, collectors still purchase them. According to Barrett Jackson media, car enthusiast and collector Ron Pratte thinks that it is a “wiser choice to invest in a classic Benz rather than putting the money in the bank; a classic Benz guarantees your money to be safe and gives you a greater profit than any other car.”
After personally going to a local Mercedes-Benz dealer to look at new cars and compare them with the old ones, there seems to be a massive difference in both price and quality. It seems as if the 2015 SLS 63 AMG was built to imitate concepts found in the 1955 300 SL Gullwing. The quality in the 300SL fully exceeds the SLS 63, the 300SL having only German high quality parts from Bosch, such as the glass lights and air conditioning unit. On the other hand, the SLS 63 uses plastic lights, and all of its “technology” gadgets appear fragile, implying that classic Mercedes-Benz cars are decently reliable. You can store the car, take it out after 50 years, replace the oil and battery and you will be ready to go, which not all classic cars can do.
Will this 2015 model become priceless in 50 years like the 300SL? There is no exact answer but it may become more expensive. However, that does not mean the 300 SL will not go up in value either. For example, the bulletproof 770 series from the 30’s was not expected to become that expensive 80 years ago, but as the cars grew older, their demand has increased. They have now become a piece of history that is both priceless and irreplaceable.
Delete Image
Align Left
Align Center
Align Right
Align Left
Align Center
Delete Heading