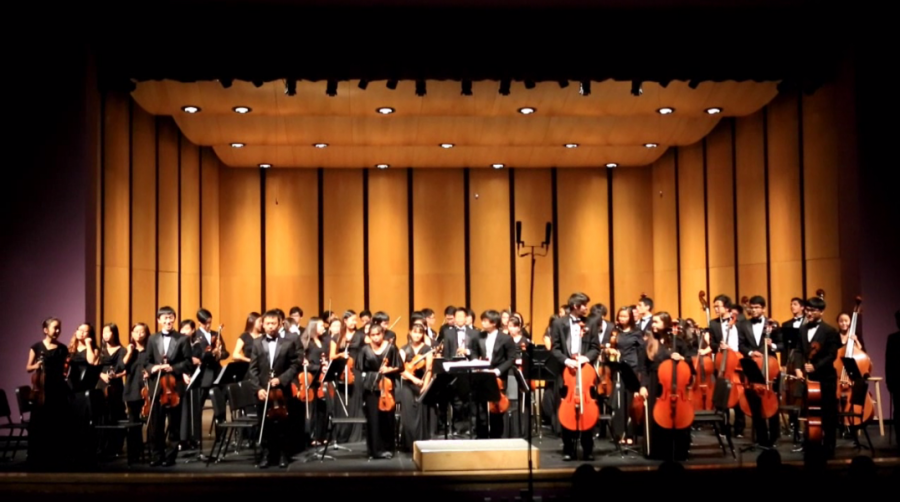 On Thursday April 2, the top orchestra programs of Irvine Unified School District (IUSD), including the University High School (UHS) Symphonic Orchestra, Woodbridge High School (WHS) Philharmonic Orchestra, Northwood High School (NHS) Philharmonic Orchestra and Irvine High School (IHS) Philharmonic Orchestra participated in the 2015 IUSD Orchestra Festival. This annual festival, hosted by and held in NHS, showcases the top orchestras of each school in IUSD. The orchestras received feedback on the performance from the adjudicators, Ms. Johanna Kroesen, a music educator at IUSD, and Mr. Steven Venz, a professional bassist.
Unlike in other festivals, the adjudicators in this festival do not score or rank the orchestras, but rather record and write their feedback so the groups can learn and improve from their performance. This festival also gives the orchestras the opportunity to listen to the music literature that other orchestras are playing.
The UHS Symphonic Orchestra, directed by Ms. Grace Lee (Visual and Performing Arts Dept.) played Of Glorious Plumage by Richard Meyer and Introduction and Allegro, Op. 47 by Edward Elgar.  UHS had previously performed these two pieces at the 2015 American Strings Teachers Association (ASTA) National Orchestra Festival, where the group received third place. Sydney Mariano (Sr.), concertmistress of the orchestra, compared the two performances. She said, “Stepping onto that stage in Northwood felt so familiar for me due to our yearly performances there, but after our performance at ASTA, I can’t help but feel extremely different. The orchestra walked onto that stage with a new aura of confidence – like we owned the stage and the pieces we were about to play. The Northwood stage became our personal playground after experiencing a hall as gigantic as the Abravanel Hall in Utah. We all knew that that night was our time to shine. To me, it didn’t just feel like our final performance of this year’s repertoire, but it also felt like our winner’s performance.”
Mariano added that the orchestra received positive feedback and constructive criticism from the adjudicators and other orchestra members. She said, “Participating in the IUSD Festival is always such a fun and rewarding experience because it is a chance to be surrounded by musicians who are just as young and talented. It is a great way to support your peers from the other schools and at the same time show them everything you’ve got.”
Clarissa Wu (Sr.), a violist of Symphonic Orchestra, said that the orchestra’s months of hard work had finally paid off with its performance at Northwood. She added, “I think with this festival performance of our most challenging piece, the Elgar, there was a sense of finality, relief, sorrow that the struggle for ASTA was coming to an end. Call it a sad Au Revoir, if you will – because standing on that stage and receiving a final standing ovation – it’s something worth all the internal and external struggles.”